These three giant snakes were summoned during the Konoha Crush.

The snakes were brown in colour with darker tomoe-like patches all over their bodies. They towered over several structures in Konohagakure including the boundary wall of the village. Each snake wore a red scarf around the base of their heads. In the anime, these snakes are merged together towards their tails.[1] They have yellow green-coloured eyes with a black outlining.

These three snakes are huge and very powerful being able to destroy parts of buildings just by slithering over them.

The snakes were summoned by numerous Sunagakure and Otogakure ninja. They were tasked with breaching the first defensive lines of Konohagakure. One of these snakes was crushed by Jiraiya when he summoned Gamahiro using the Summoning: Food Cart Destroyer Technique. 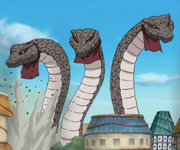