Normally, they are friendly and calm, but their combative spirits arise when a battle breaks out.

Being triplets, all three dogs have the same grey fur with white undersides and short pointed ears and mostly resemble Huskies. They have also seemingly grown much larger in Part II since their Part I appearance.

As Inuzuka ninken, they use collaborative attacks with Hana. The four could use a technique where they roll at high speed to defeat the enemy together.[1]

In the anime, it was revealed that prior to the start of the invasion, Hana, along with the Haimaru Brothers, and another shinobi were assigned to investigate rumours of a disturbance in part of the village. While heading towards the area, they came across Kabuto Yakushi, who she advised to head home after learning that he was not aware of the situation.[2]

The three canines were first seen during Orochimaru's invasion of Konoha. Alongside Tsume Inuzuka, Kuromaru, and Hana, they aided in the fight against the invading Suna and Oto-nin.

They appeared in Kiba's flashback along with Hana, Kuromaru and Tsume Inuzuka when Kiba first meets Akamaru when they were children and promises that he'll take good care of him. When Kiba returned from his mission to retrieve Sasuke Uchiha badly injured, the triplets waited in his room alongside several of canines from the clan as Hana treated Akamaru's wounds.

In the anime, they, along with Hana, were assigned a mission to find Akamaru and inject him with a cure that could possibly work. When they encountered Akamaru the trio diverted his attention while Hana attempted to administer the drug.

In the anime, one of the triplets was seen alongside Hana and the other Konoha shinobi by celebrating Naruto's victory over Pain after the invasion was over.

During the Fourth Shinobi World War, one of the triplets is again seen alongside Hana when members of the Fifth Division were sent as backup for the Second Division after the enemy was detected travelling underground. He and Hana launched into battle using the Fang Rotating Fang technique to destroy the White Zetsu Army clones, once they were unearthed. 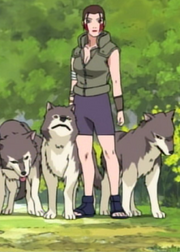