The Three Sand Siblings is the collective name for the children of Sunagakure's Fourth Kazekage: Temari, Kankurō and Gaara. Having undergone the gruelling training of their village, these three are regarded as elite shinobi of their village that excel in long-range combat.[2]

In Part I, they took part in the Chūnin Exams in Konoha,with Baki serving as their jōnin commander. Although meant to appear as prospective chūnin, they were actually waiting for the Konoha Crush to begin. They were later sent to aid the Sasuke Recovery Team as a sign of goodwill between the now allied nations after what happened during the would-be invasion attempt.

In the anime, during the Sunagakure Support Mission, the Sand Siblings chased after the Four Celestial Symbols Men who had kidnapped Gaara's student Matsuri. Kujaku battled Temari, Ryūgan battled Kankurō, and Gaara battled Suiko. They each were almost killed until Shikamaru, Ino, Kiba, Chōji, Rock Lee, and Naruto saved them, to pay them back for the Sasuke Recovery mission. Hōki eventually got Gaara to unleash the Shukaku and revive Seimei, but Gaara destroyed him.

Some time after the Konoha Crush failed, its members were promoted: Gaara became the Kazekage, Kankurō and Temari became jōnin, Temari also becoming an ambassador.

In Part II, Temari and Kankurō attended Gaara to the Five Kage Summit as his bodyguards.

Following the end of the Fourth Shinobi World War, Gaara remained the Kazekage and Kankurō his bodyguard. Temari at some point emigrated to Konoha after marrying Shikamaru Nara, and eventually had a son named Shikadai. In the epilogue, Gaara and Kankurō visited their sister and nephew before attending the then-upcoming Five Kage Summit meeting. 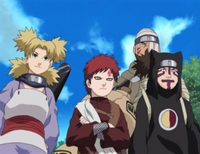 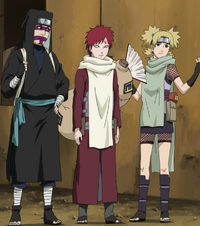