Toads (蝦蟇, Gama) are the most recurring summons to be seen in the series due to some of the main characters: Naruto Uzumaki, Jiraiya, and Minato Namikaze being able to summon them. They reside on Mount Myōboku.

Toads possess a wide range of abilities, being able to spit water or oil from their mouths as well as utilising things ranging from their own tongues and weapons in battle. What is most unusual is that they are one of the few species able to do ninjutsu, and one of the few animals thus far capable of hand signs. Toads are also familiar with senjutsu, making them (along with their contractor) very powerful when invoked on the battlefield.

They vary greatly in size; ranging from giant summons such as Gamabunta, Gamaken and Gamahiro that tower over trees and can dwarf large rock formations, while others such as Gamakichi and Gamatatsu, were small enough in Part I to ride on a man's head. The two have got much bigger since their last appearances, Naruto now being capable of standing on their backs. Others, like Fukasaku and Shima, are as small as Gamakichi and Gamatatsu when they were still the aforementioned small sizes despite their advanced ages. The toads have also shown unique personalities; Gamatatsu has a fixation for snacks and Gamakichi enjoys watching battles from safe distances. Their father, Gamabunta, speaks like a yakuza gangster, who won't work with anyone he doesn't respect. Despite this, he is fiercely protective of his children and Naruto, and will fight for their safety regardless of his respect for the summoner (or, more likely, whether or not Jiraiya was on his good side). Gamaken, who was introduced in Part II, spends the bulk of his appearances commenting on how weak and clumsy he is.

The toad elders seem to hold high positions in toad society; the Great Toad Sage, an ageing and somewhat senile toad, hands down wisdom and predictions to the younger generations and is highly respected for his track record of always being right. Getting to meet with him is considered a great honour. A married toad couple, Shima and Fukasaku, assist the Great Sage in his work. They also seem to be particularly powerful, as Jiraiya summoned them to help him during a battle with Pain. Jiraiya spoke to both of them very respectfully, whereas with most other toads he treated as his equals. Although Shima and Fukasaku constantly bicker over such things as dinner and Jiraiya's immaturity, their combined efforts were enough to defeat three of Pain's bodies.

Toads can have long lifespans, as the Great Toad Sage lived since the era of Hagoromo Ōtsutsuki, and Fukasaku is over 800 years old. Various toads also have a fast growth rate, as Gamakichi grew from an averagely large toad (enough for a man to stand on) during Pain's Assault, to 16.9 metres tall during the Fourth Shinobi World War.

Mount Myōboku's population includes unique species of toads and other toad-like amphibians. Some are have unique body structures, as in the Scroll Toads which can have secrets written on their scroll-abdomens. Others merely have unique skills or qualifications, as in the "Tracker Toad" which can be used to locate individuals.[2] Another example of Mount Myōboku's diverse populi is the amphibian, possibly also a toad, that served as Fukasaku's perch when he came to Konohagakure to bring them the news of Jiraiya's death.

The oesophagus of a great fire-breathing toad. 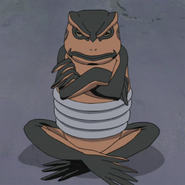 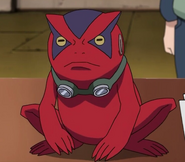 The toad summoning contract has been signed by at least six people.[4] Only three of these six have been seen in the series:

The most frequent summoner of the toads, Jiraiya's techniques mainly consisted of toad-based abilities. Jiraiya's nickname was even The Toad Sage (蝦蟇仙人, Gama Sennin). The toads had a cordial and mutually respectful relationship with him.

Not much is known about Minato's relationship with the toads but apparently he was well-respected among them. His only known summons were Gamabunta and Gerotora. He called the former to help him fight the Nine-Tailed Demon Fox and entrusted the latter with holding the key to the seal on Naruto's stomach.

Naruto didn't usually summon them unless he needed to fight larger and or very strong opponents. However, upon Jiraiya's death, Naruto became more proactive with them, even going to Mount Myōboku to learn senjutsu. Naruto is highly respected among them as their leader foretold him as the Child of the Prophecy.

In the anime, Konohamaru was able to summon a toad named Gamagorō for a lesson in Summoning Technique to Boruto and his classmates.

Koji Kashin summoned a boiler toad that has artificial body parts to kill Ao upon his failure to kill Team Konohamaru. He also used a small toad as a means to activate his True Fire of Samadhi against Konohamaru and later on sent in a small toad to spy on Naruto's house until he was forced to call it back when Jigen came in and noticed him.