Toki (土岐, Toki) was a member of Shinobazu.

Toki happens to be rather arrogant and is prone to making jokes while in combat.[1] He, however, is very strategic, managing to lure his bait into a large crater. It is presumed that he has some knowledge in geography, considering he created a man-made canal with his drilling device that caused a current.

Toki has a short crop of brown spiky hair and small black eyes, and wears a white-clothed headband. The drilling device he uses to perform his Crimson Earth technique is located on his right arm. Aside from this, he wears a green, arm less robe with a yellow line coming down from the black collar.

Toki utilises a drill-like device when it comes to fighting. Using strategical attacks throughout the earth, he can fatally injure anyone unfortunate enough to get in the way of his device. Using the Crimson Earth, he can effortlessly create craters and holes in the earth with destructive impact.

Toki is first shown creating a man-made canal in order to form a current. This action was in conjunction with Monju's Murderous Grasp technique, where as Gantetsu's captivity was split in two, and later separated. The act separated Naruto Uzumaki, Gantetsu, and Todoroki from Sakura Haruno, Rock Lee, and the other guards that were saved from the shipwreck.[2] A day after the failed attempt in capturing Gantetsu, Toki personally went in for the kill; luring the three into a trap, only to crush them with his drilling device. Unfortunately for him, Toki had destroyed shadow clones under the Transformation Technique. Toki and Naruto begin to battle, however, the results ended up against Toki's favour, resulting in his death to a rock slide created by a Rasengan. 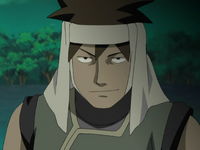