Tokuma Hyūga (日向トクマ, Hyūga Tokuma) is a shinobi from Konohagakure's Hyūga clan. He was part of the revised Infiltration and Reconnaissance Party.

Tokuma is a calm and level-headed person from all indications. He is also selfless, as witnessed in his willingness to sacrifice himself so that his teammates could escape from Akatsuki's Surprise Attack and Diversion Platoon.

Tokuma has shoulder-length, spiky brown hair with two long bangs framing either side of his face and the featureless white eyes inherited by all Hyūga clan members. He wears the standard Konoha shinobi uniform complete with a forehead protector in bandanna style and flak jacket.

According to Muta Aburame, he currently possesses the best Byakugan in his clan.[2] Tokuma is also an adept tracker, having trained his Byakugan specifically for this purpose.[1]

In the anime, Tokuma, along with Muta and Ranka, are assigned to Anko's team to investigate one of Orochimaru's hideouts and determine Kabuto Yakushi's whereabouts after Sai and Yamato had left the mission. When they arrived, Tokuma informed them of Danzō Shimura becoming the Sixth Hokage Candidate and Pain's assault on the village.

While following a trail of corpses left by Kabuto, Tokuma wonders if it was a deliberate action on Kabuto's part as well as his intentions. As the trail seemingly stops outside a desolated area, at Anko's request he scouts ahead with his Byakugan. With shock he alerts the team that he observed Kabuto and a masked man from Akatsuki conversing with each other, before the pair walked towards what seemed to be an underground passageway.

He and his team were later seen scouting out the remainder of the Mountains' Graveyard, where he discovered the Zetsu army concealed deep underground, right before the Fourth Shinobi World War began. After seeing they were now on the move, Anko ordered them to report back to base immediately in order to inform the rest of their army, while she remains behind and attempts to infiltrate the hideout.

Tokuma, while reluctantly fleeing, identifies an approaching enemy team closing in, provoking him to tell his teammates to continue their retreat while he holds them off. Tokuma is captured by the Akatsuki team and is forced by Sasori to fight his allies. He was however, later freed by Omoi who cuts Sasori's chakra threads and then carried to Kiri to be healed. 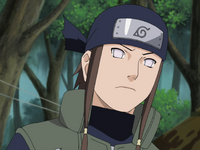