Koji confirms he was created to kill Jigen. Watching the transmission at Konoha, Naruto asks why they're fighting if they're both Kara members. Amado explains they were both pretending to be Kara, their true objective being killing Jigen. As he was severely drained from the fight against Naruto and Sasuke, this is an opportunity they won't have again. Jigen considers Koji to be a mere tool used by Amado, and Koji is ok with it, as that's what he considers shinobi to be. Koji attacks with Fire Release, which Jigen absorbs with Kāma. While doing so, Koji positions himself behind Jigen, drenches him in oil, and places several toads on him, which burn more intensely because of the oil. Kawaki doesn't think it'll make a difference because of the Kāma. Naruto recognises Koji's fighting style. Jigen absorbs the flames and engages in taijutsu against Koji. Koji uses shadow clones, but Jigen evades it and pierces one with his rods. Jigen avoids another shadow clone by shrinking, and pierces it as well. Jigen comments on Koji's seriousness in wanting him dead, and hopes he's prepared to die. Koji feels the same, and addresses Jigen as Isshiki Ōtsutsuki. Amado explains that Isshiki came to their planet as Kaguya's partner, per the usual Ōtsutsuki expansion method he already explained. For reasons unknown to Amado, Kaguya turned on Isshiki, leaving him on the verge of death. He only survived by taking over a novice monk that happened to be nearby, Jigen. Sasuke asks if that's when Jigen was marked with Kāma.

Before continuing, Amado confirms with Naruto his asylum deal, and won't remove Shikadai's collar until he has the deal in writing. Naruto does so, and Amado continues. Using Boruto and Momoshiki as an example, he reveals that Kāma is actually replicated data from an Ōtsutsuki that is implanted, comparing it to a compressed backup file. Overtime, that file is uncompressed, overwriting the will of the person marked with it until the Ōtsutsuki who made it is reborn. Naruto asks if there's a way to block the process. Amado isn't aware of any, though he speculates that killing Boruto before he's overwritten would work. Sasuke asks what happens to the Kāma in the case of a successful resurrection. Amado believes it would simply vanish, and Sasuke points out that Isshiki has taken over Jigen, but Jigen still bears a Kāma. Amado chuckles, angering Shikamaru. Amado observes Sasuke's point, and explains that Isshiki didn't take over Jigen through usual means. Implanting a Kāma is a significant under-taking, something Isshiki didn't have enough power to do while near death. Instead, he shrunk himself, and physically entered Jigen's body, acting as a parasite until he took over his brain, only implanting a Kāma at a later point. Jigen extends his Kāma and continues to fight Koji. Koji immobilises Jigen with an Earth Release. Naruto questions why Isshiki hasn't revived through Jigen. Amado explains that selecting an appropriate vessel is essential for a successful rebirth. Jigen was the only available vessel for Isshiki at the time, and his body isn't strong enough to sustain a fully restored Isshiki, so Isshiki through Jigen began preparing a more resilient vessel, Kawaki. Jigen escapes Koji's Earth Release by shrinking and sends more rods his way, which Koji dodges. Koji retracts his Earth Release, revealing summoning marks. Flames burst through, and Jigen tries absorbing them, only to discover he can't. Koji explains these are natural occurring flames he summoned from another location, and as they're not Fire Release, he can't absorb them. Amado stresses they mustn't allow Isshiki to be reborn in Kawaki's body. As long as there are Kāma, the Ōtsutsuki will remain beings who can transcend death. However, he points out it is possible to kill them, and that he'll teach them all how to do it. 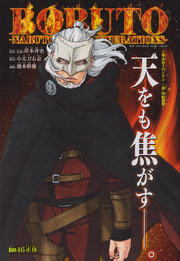