Truth-Seeking Balls are hand-sized orbs of black chakra that users can use to alter its shape to serve for a variety of purposes.

There are multiple ways to acquire the Truth-Seeking Balls:

The number of Truth-Seeking Balls that are acquired varies from user to user. Acquisition method may determine the number, as both Obito Uchiha and Madara Uchiha gain ten orbs upon becoming the Ten-Tails' jinchūriki; Obito initially has only two orbs, gaining the other eight once he gains control of the Ten-Tails' power. Naruto Uzumaki instead gains nine orbs,[3] and Toneri Ōtsutsuki is depicted with an inconsistent amount.[4] When not being used, orbs generally float behind the user's back in a circular formation; Hagoromo's float beneath him while he's levitating, and Hamura's instead float behind him in a sigmoidal formation.[4] The orbs are always on standby once created, although they do disappear if the user cancels Six Paths Sage Mode,[5] and users cannot create additional orbs after the initial acquisition number; thus, orbs that are lost for whatever reason cannot be replaced. Clones are not created with orbs of their own,[6] though they are able to use the original's orbs and the original maintains mental control over them and can transfer them back to themselves or to another clone.[7]

Truth-Seeking Balls are composed of all five basic natures,[8] in a way similar to yet surpassing kekkei genkai and kekkei tōta.[9] If imbued with Yin–Yang Release,[1] they can be used to neutralise ninjutsu and by extension become impervious to it; this negates the regenerative qualities of the Impure World Reincarnation, making it possible to kill or permanently damage those who have been reincarnated.[10] Only senjutsu has been shown to consistently counter Truth-Seeking Balls,[10] as according to Naruto, natural energy works against itself.[11] If users are killed or their chakra otherwise disappears, the orbs will disintegrate in a manner similar to black receivers.[12]

Truth-Seeking Balls are extremely destructive, capable of turning targets to dust in a similar manner to Dust Release.[9] The orbs are similar to Tailed Beast Balls,[13] and in fact can be used by Naruto Uzumaki to create his Tailed Beast Ball Rasenshuriken.[14] When kept in their default sphere form, they can be used as high speed projectiles,[15] as explosives by making them rapidly expand,[16] or to heal the user's injuries through physical contact.[17] Whatever their shape, users can only control them within 70 metres of their location, allowing opponents to combat them by transporting the orbs elsewhere.[18]

Truth-Seeking Balls can be controlled individually or combined together: in both cases, the power of "all things in nature" (森羅万象, Shinra Banshō) can be used to shape the orbs into different forms, with the shape's effects determined by how its natures are combined.[1] Most users are able to manipulate Truth-Seeking Balls without any special effort,[19] though Obito must pass the balls through holes that form in his hands in order to alter their form but he is able to increase their sizes as a result, eliminating the need to combine multiple Truth-Seeking Ball into one to create a barrier. Hiruzen Sarutobi theorises that there is a time limit to how long the shape can be maintained,[9] though this is never confirmed.

With the power of Tenseigan Chakra Mode, Toneri can manifest an inconsistent amount of Truth-Seeking Balls and infuses them with the chakra of his chakra cloak, giving balls a green glow, which he can use both offensively and defensively.

They can be combined into a massive vortex to even a giant sword of gold which is powerful enough to cut the entire moon in half; and shoot them as projectiles. Toneri also demonstrated the ability to transform one of the balls into a golden cage after infusing it with his chakra.[4]

Stretched around the user as a defence.

The Sword of Nunoboko (left hand) and a shield (right hand). 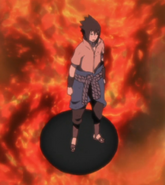 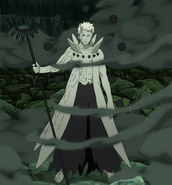 Retrieved from "https://naruto.fandom.com/wiki/Truth-Seeking_Ball?oldid=1268263"
Community content is available under CC-BY-SA unless otherwise noted.