Tsukiyo (ツキヨ, Tsukiyo) was the lieutenant and the second-in-command of the Mujina Bandits.[1]

Tsukiyo became a member of the Mujina Bandits, working his way up to second-in-command. At some point however, when both Tsukiyo and his boss, Shojoji, were cornered by a group of shinobi, Shojoji consumed Tsukiyo's brain through the Corpse Clone Technique to take his form in order to preserve the gang's reputation by preventing the boss' capture from being publicised.

While unknown personally, based on Shojoji's performance on the man, Tsukiyo was shown to be very vicious and callous man.

Tsukiyo is a man of fair complexion, excluding a long scar running down the right side of his face and over his lips. He has green short hair with thick black eyebrows, pronounced cheekbones, and a broad nose. His eyes are blue with tear-lines under them.

While Shojoji assumed his form, he seemingly used techniques that belonged to Tsukiyo. This included skill with Lightning Release, able to launch bolts from his fingertips, which can instantly kill a target and shatter rocks. This lightning is similar in appearance to Kumogakure's Black Lightning, but with a pink glow instead. He also could use a variety of shadow-manipulation techniques similar to the Nara Clan. His Moon Shadow Technique gets stronger depending on how big the moon is.

Tsukiyo's identity was put to use by Shojoji, hiding the fact that the Mujina Bandits' leader was captured to maintain his organisation's reputation. 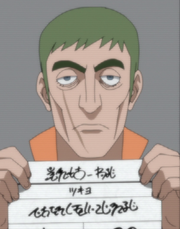