Tsunade thinks about Orochimaru's offer to revive Dan and Nawaki and, in turn, her time with them when they were alive. All the while, she observes Naruto's progress with the Rasengan. Naruto is still unable to contain the Rasengan's strength into a sphere shape. After a week, he appears to have lost his bet with Tsunade, not having mastered the Rasengan. Jiraiya and Tsunade have drinks together the night before the deadline, during which Tsunade slips something into his drink. 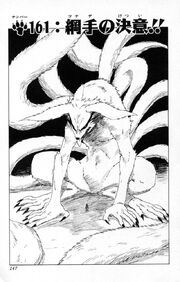