Worried, Tsunade tries to leave Tanzaku Quarters, but Shizune convinces her to visit some tourist attractions first. Meanwhile, the mark on his palm is still not helping Naruto to concentrate his chakra. He remembers back to his days in the Academy when Iruka had him concentrate on his studies by placing a leaf on his forehead. Deciding to make use of a lesson he dismissed at the time, Naruto modifies the mark into the appearance of a leaf, finally helping him concentrate enough chakra into his Rasengan to burst the rubber ball, completing the second step. As Tsunade and Shizune elsewhere look at Tanzaku Castle, the castle collapses and Orochimaru emerges from the rubble.

For the final step of his Rasengan training, Naruto must again use a balloon. This time, however, he is not to pop it. He is instead containing the power of his spinning chakra within a spherical shape; the balloon is merely a guide to achieve this goal. Although this is much more difficult than the first two steps, Naruto and Jiraiya must keep moving if they are to find Tsunade. In Tanzaku Quarters, Orochimaru confronts Tsunade. Seeing the condition Orochimaru is in, she immediately refuses to heal him. She does ask how his arms were so badly damaged, to which he responds it was carelessness when killing the Third Hokage. When this upsets Tsunade, the Third having been her teacher, Orochimaru points out that she should be used to losing loved ones.

Angered by Orochimaru's words, Shizune attacks him. Kabuto blocks her attack. Tsunade tells her to calm down and then proceeds to decimate the wall behind her, a warning for Orochimaru not to mock her again. She tells them to leave but Orochimaru offers to revive her two loved ones if she will heal his arms. Finally interested, Tsunade asks what he would do if regained use of his arms. He responds that he would destroy Konoha.

Jiraiya and Naruto near Tanzaku Castle. Along the way they learn that the castle was destroyed by a giant snake. Suspecting Orochimaru, they race to the scene. Tsunade considers Orochimaru's offer to revive her loved ones in exchange for healing his arms, despite knowing it would mean Konoha's destruction. Shizune tries to convince Tsunade to kill Orochimaru since Dan and Nawaki would not place their lives over the village, but Orochimaru takes advantage of Tsunade's fear of blood to immobilise her. Deciding to give her a chance to think, Orochimaru leaves and tells her he will be back in a week to see what her answer is. Jiraiya and Naruto arrive after everyone has left, but happen to run across Tsunade and Shizune while later getting dinner. Jiraiya bluntly asks her to become the next Hokage, confirming the Third Hokage's death for Tsunade.

Tsunade refuses to become Hokage. Naruto does not care about her answer and suggests dragging her back to Konoha so that she can heal Kakashi and Sasuke. Tsunade observes to Jiraiya that Naruto is more obnoxious than the Fourth Hokage, his previous disciple. Tsunade goes on to say that the Fourth needlessly gave his life for the village. With the Third Hokage having now done the same, just as the First Hokage and Second Hokage did, Tsunade concludes that being Hokage is a joke. Naruto lashes out at her for insulting the previous Hokage. Tsunade agrees to fight him and, although he is out-classed, he continues trying to attack her. She asks why he cares, to which he responds being Hokage is his dream. Reminded of Dan and Nawaki, Tsunade is distracted, giving Naruto a chance to attack with his incomplete Rasengan.

Recognising the Rasengan, Tsunade creates a fissure in the ground. Naruto falls in and the Rasengan is forced into the ground. Seeing that it is incomplete, Tsunade reprimands Jiraiya for teaching him such a technique as it just gives Naruto unwarranted hope. Determined to prove her wrong, Naruto vows to master the Rasengan in three days. Tsunade offers the deadline of a week instead. If he can stay true to his word, he can have her priceless necklace; if he fails, she gets his wallet. Naruto accepts and runs off to start training. Tsunade and Jiraiya get drinks, during which Jiraiya reveals he is aware of some deal she has made with Orochimaru. If she decides to help him, Jiraiya states he will not hesitate to kill her. He then observes that Naruto is very much like her brother Nawaki, which Shizune elsewhere decides to tell Naruto about.

To defend Tsunade's harsh words, Shizune tells Naruto about why she is now so pessimistic and why her necklace is so important. When Tsunade was younger she gave the necklace to her younger brother, Nawaki, in the hopes it would help him achieve his dream of becoming Hokage. He died the next day, a casualty of the Second Shinobi World War, returning the necklace to her. After that she began advocating adding medical-nin to squads to prevent more deaths like her brother's. This gained Dan's attention who, also wanting to be Hokage, wished to save as many lives as possible. Tsunade gave him her necklace when they began dating to help him in his goal. He too died during the war, and in her failed attempts to save him she developed a fear of blood. The necklace came to be regarded as cursed and Tsunade lost faith in dreams and the Hokage. Deciding to prove her wrong, Naruto resumes his Rasengan training so that he can win the necklace from Tsunade.

Tsunade thinks about Orochimaru's offer to revive Dan and Nawaki and, in turn, her time with them when they were alive. All the while, she observes Naruto's progress with the Rasengan. Naruto is still unable to contain the Rasengan's strength into a sphere shape. After a week, he appears to have lost his bet with Tsunade, not having mastered the Rasengan. Jiraiya and Tsunade have drinks together the night before the deadline, during which Tsunade slips something into his drink.

Tsunade checks on an unconscious Naruto. Because of his week of intense training, she concludes he will sleep for several days. Knowing that he hadn't mastered the Rasengan and believing it now impossible for him to do so before the challenge deadline, Tsunade begins to leave. Shizune tries to convince her not to help Orochimaru and goes so far as to face off with Tsunade, but she is easily bested and knocked unconscious. As Orochimaru and Kabuto head towards the meeting place, Orochimaru remembers Shizune's earlier actions and sends Kabuto to eliminate her. The next morning Naruto wakes up Shizune, the Nine-Tails within him having healed his injuries faster than the two women expected. Shizune tries to pursue Tsunade but is stopped by Jiraiya, who has been drugged by Tsunade and is having difficulty moving. Noticing Kabuto, Jiraiya questions Shizune about Orochimaru's secret arrangement with Tsunade. At Tanzaku Castle, Tsunade offers to heal Orochimaru's arms if he will promise to leave Konoha alone. He agrees. 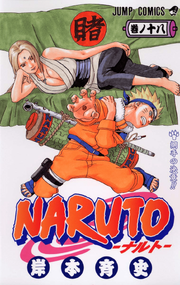