"The Will of Fire Still Burns!"

Konohamaru is visibly saddened by the fact that his grandfather's things were being removed from the Hokage's office because of the new Fifth Hokage. As Konohamaru rushes up the stairs of the Academy to stop them, he accidentally runs head-first into Tsunade's bust. Later, Tsunade goes to the hospital to heal Sasuke Uchiha, Kakashi Hatake, and Rock Lee. She heals both Sasuke and Kakashi then proceeds to examine Lee. With regret, she tells Lee that he will have to end his career as a shinobi as some of the injuries were far too grave and the chances of him surviving the operation were slim. Upon hearing the news, Lee walks out of the room contemplating what Tsunade had just told him. 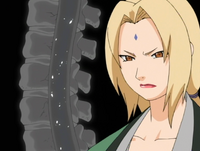