Uō has short, brown hair and dark-coloured eyes. He wears a black forehead protector and a Konoha flak jacket.

Uō is able to send a gust of sharp wind at his enemies using Wind Release. He carried a Bō staff and is able to duplicate the weapon.

Main article: Mitsuki's Disappearance Arc While on guard duty with Saō at Konoha's main entrance, the pair were attacked by two and took Mitsuki with them before dawn, leading to the guards going into a coma and being hospitalised. Ino checks his memories of the incident, revealing to Naruto and other members of Konoha's leadership that Mitsuki left with the assailants of his own will. Later, upon awakening, he informed the Seventh Hokage the assailants were from Iwagakure and the group was on route to the Land of Earth.

While continuing his duties to guard the gate, Uō and Saō were surprised by the sudden appearance of the Hokage, who was considering closing off he gates in light of Kara having spies. The pair insisted they work hard to inspect all who come to and leave the village. Naruto voiced his confidence in their effort. 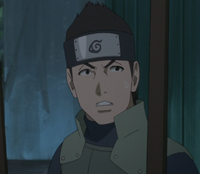