Udon Ise (伊勢ウドン, Ise Udon) is a shinobi of Konohagakure, and the leader of Team 5.

As a child, Udon was an easy-going and quiet individual.[1] He usually looks very sleepy, and is always seen with a drip of snot hanging from his nose. Udon has stated many times that he loves math, as he is sometimes seen writing math problems during class. As an adult, he is a very collected and straight-forward man who is shown to be keen minded and perceptive. As a teacher, he has a strict but fair teaching style and is not above punishing his students for making mistakes that could have cost them dearly. Overall, his students view him as "cool", and were surprised to hear how awkward he was as a child.[3]

Udon has short brown hair and dark eyes. He is characterised by the drip of snot always seen hanging from his nose and his circular glasses. While in the Academy, he wore a simple blue shirt which zipped up the middle, a pair of brown pants, sandals and a pair of goggles to represent his membership in the Konohamaru Ninja Squad. As a genin, he has grown noticeably taller, and wears a black top and blue pants with regular shinobi sandals. Instead of goggles, he now wears the village's forehead protector.

Several years later, Udon has not changed his appearance much. He has stopped wearing the Konohagakure forehead protector. He also dons a pompadour-like haircut. He also wears new rectangular glasses. On active duty, Udon wears his forehead protector and wears a navy blue attire and a Konoha flak jacket with long sleeves and a medium-length hem.

During his time at the Academy, Udon considered himself a loser, due to struggling to properly perform the Clone Technique, leading to him failing to graduate several times.[3] Upon becoming a genin, he could collaboratively perform the Bouncy Bouncy Technique with his teammates,[4] but his repeated mess up on missions cause him to label himself as a burden on his team. Fifteen years after the Fourth Shinobi World War, he had become a jōnin who specialised in producing powerful water tendrils from his mucus.[3] He's also very attentive, able to deduce whether others are under the influence of genjutsu and quickly release them.[5]

During the Oto-Suna invasion, he is seen with Konohamaru and Moegi as they are with other civilians being guided to safety.

In the anime, he, Konohamaru and Moegi are led by Naruto on a mission against other Academy teams.[4]

About two years after Naruto left the village to train with Jiraiya, Konoha decided to host an early Chūnin Exam alongside Sunagakure. While he and his friends began fantasising about becoming chūnin themselves, Shikamaru Nara reminded them that they hadn't even become genin yet. Though dissapointed about what they heard, they were worried about Naruto being left out so Konohamaru stooped to disguising himself as him but he was quickly caught by Neji Hyūga's Byakugan. Neji explained that Naruto would return when he's ready as he dreams of becoming Hokage, something he and his friends accepted.[7]

In Part II, Udon has already been promoted to a genin with Konohamaru and Moegi under the supervision of Ebisu. After his team returned from a mission of finding a lost cat, they met Naruto on his return to the village with Jiraiya. Called for a mission with his team, he was also troubled when Tsunade mistakenly said that they were going on a S-rank mission.

In the anime, he appears again, when Konohamaru was demonstrating his Sexy: Girl on Girl Technique. He witnesses Moegi beating Konohamaru up, for creating such a perverted and seemingly useless technique, and he is visibly troubled by his teammate's injury. In the manga, Sakura is the one to punch Konohamaru.

During the invasion of Pain, he is seen along with Moegi eating at the Dango Shop when they notice the explosions. He is then seen again along with Moegi and Konohamaru discussing what they can do during Pain's invasion and they decided that their best option is to help the villagers evacuate to a safer place. They are later seen helping in the efforts to rebuild the village.

In the anime, Udon runs to Moegi and Konohamaru announcing Naruto's return to the village. He is disappointed when Naruto delays his interview with them.

Main article: Kaguya Ōtsutsuki Strikes After the Infinite Tsukuyomi was cast, Udon along with everyone within Konoha was captured by the Ten-Tails roots. Ultimately, he and the rest of the world were freed from the genjutsu by Naruto and Sasuke, after they ended the war. He later attended the mass funeral held in Konoha.

Main article: Konoha Hiden: The Perfect Day for a Wedding Udon appears in this anime arc.

Main article: Naruto Gaiden: The Seventh Hokage and the Scarlet Spring Fifteen years after the Fourth Shinobi World War, Udon and Moegi alert the Seventh Hokage that his son was playing a prank again, this time painting on the faces of the Hokage Rock and disrupting the arrangement of the happening Kage Summit.

Main article: Genin Mission Arc In the anime, after Udon became the leader of Iwabee Yuino, Denki Kaminarimon and Metal Lee in Team 5, the team was given their first mission from Naruto directly, which involved them gardening.

Main article: Byakuya Gang Arc In the anime, Team 5 was assigned alongside other genin teams to help stop the Byakuya Gang. However, the genin were not permitted to engage the Byakuya Gang without aid from a chūnin or higher-ranked shinobi. Following Iwabee's overzealous nature, Metal and Denki joined their team-mate in engaging the thieves, which resulted in Metal getting injured and being hospitalised. Udon scolded Iwabee for his reckless actions and clear disregard of orders. He determined that Iwabee should remain confined to his home until further orders.

Main article: Versus Momoshiki Arc In the anime, when the genin of his time approached Udon to allow them to participate in the Chūnin Exams, he granted them permission.

Main article: Mitsuki's Disappearance Arc In the anime, after the apparent betrayal of Mitsuki to Konohakagure and his desertion, the village was put on lockdown. Later, it was discovered that Boruto and Sarada went missing, to search for Mitsuki. Udon reported it to the Seventh Hokage. As Udon and his team continued their patrol duties during the lockdown, they bumped into a frantic Yurito. He claimed someone attacked one of the guards in recovery and was rushing to get help, but Udon saw through the lie as Yurito would have sent someone else to report such an act as he was head of the Medical Security. Realising he was found out, Yurito took Denki hostage, only for the genin to escape with a flash bomb. As the team's genin attempted to subdue Yurito, Udon realised that he was under genjutsu. He proceeded to free him. As the man began coming to his senses, a C1 Explosive Clay emerged from his flack jacket, detonating and severely injuring Yurito.

Main article: Time Slip Arc In the anime, Sasuke and Boruto followed Urashiki Ōtsutsuki into the past, arriving at the timeline shortly after the young Sasuke defected from Konohagakure. While Boruto, past-Naruto, and Jiraiya battled Urashiki, the Konohamaru Army Corps watched from the bushes, amazed when Naruto managed to knock out the foe with his Rasengan. When the foe however transformed into monstrously powerful being, Udon and his friends decided to go for help. While the higher-ups didn't listen, they found several of Naruto's friends, who quickly agreed to help.

By the time they arrived however, Urashiki was already defeated. The group then escorted their injured friends to the hospital. Days later, after Sasuke and Boruto recovered and prepared to return to their time, Sasuke first used his Sharingan to erase the memories of everyone he and Boruto came in contact of the recent events with to protect the timeline.

In the anime, Udon attended the memorial service for the fallen people of the Fourth Shinobi World War.

During Naruto's flashback to the members of the village when he was gathering natural energy to enter Sage Mode, Udon can been seen amongst the villagers.

Udon Ise is a playable character in the following video games: 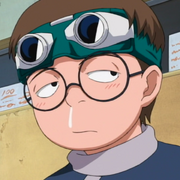 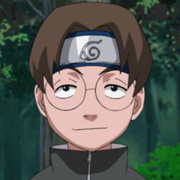 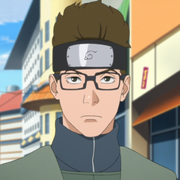