Before Naruto and Jigen can begin fighting, Kawaki offers to go willing if he spares Naruto, telling Naruto Delta was nothing compared to Jigen. Jigen agrees to the terms, but Naruto refuses, stressing that as Hokage, it's his responsibility to protect everyone in Konoha, including Kawaki. Seeing that compromise is impossible, Jigen portals away with Naruto to a different, desolate dimension. Jigen intends to leave Naruto stranded, but Sasuke arrives kicking Jigen aside. Jigen surmises his identity, and the two disagree on whether the timing of his arrival was good or bad. Sasuke is glad the dimension is empty, so they don't need to hold back against Jigen, who merely laughs at the notion. Sarada arrives at Naruto's home, finding bloodied rods in the garden, and Kawaki by himself. Boruto's Kāma recedes. Jigen absorbs one of Naruto's Rasengan. He just barely blocks Jigen's kick, and two rods appear on his arm. Sasuke separates Naruto from Jigen with a kick to the jaw and attacks Jigen with his sword, who blocks it with a large rod and then lands a couple more on Sasuke. Naruto attacks with shadow clones. One is destroyed by rods, and Jigen suddenly disappears when cornered by two clones. He reappears above them, and destroys the remaining clones yet again with rods. Sasuke is able to determine Jigen's ability works by shrinking and enlarging objects and himself, and warns Naruto that's not his only secret. Jigen praises Sasuke's abilities, and determines him to be the more dangerous foe, who he must eliminate first.

Jigen attacks before Sasuke can further inform Naruto. He sends more rods, which Naruto is able to block with a wider Rasengan. During the subsequent exchange of melee attacks, Jigen shrinks again to avoid them, but Sasuke is able to tell Naruto where he is, who in turn attacks with another Big Ball Rasengan. Jigen begins absorbing it even while shrunk, which impairs his mobility and allows Sasuke to attack him. Jigen escapes by teleporting away from the attack, and back to normal size, he thanks them for teaching him weaknesses of his abilities. Manifesting a horn from Kāma, he says they won't be lucky again. Sasuke recognises it from spying on him before. 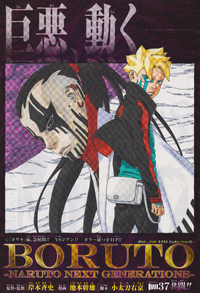