Pride Goeth Before a Fall

Sasuke and Sakura go into hiding, planning to ambush Kakashi when an opportunity presents itself. Naruto takes a direct approach and confronts Kakashi, planning to immediately take one of his two bells so that he can have something to eat. Kakashi repels Naruto's attacks with little effort, all without interrupting his reading of an Icha Icha book. Kakashi warns Naruto to avoids showing his bind spot to an enemy and attacks with One Thousand Years of Death that sends Naruto crashing into a nearby lake. Frustrated by the ease with which he is being defeated, Naruto creates a number of shadow clones to overpower Kakashi. The clones capture and attack Kakashi, only to discover that Kakashi is another of Naruto's shadow clones. 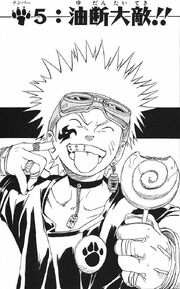