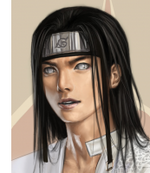 Hello D!ABLO-32, greetings and welcome to the Narutopedia! Thanks for your edit to the Sakumo Hatake page.

To be honest with you, I don't remember what you're talking about. I searched Kabuto's talkpage history and I don't see your edit ._. It does matter how old the discussion is actually, as we tend to remove additions to discussions that have "died". With that said, you're free to start a new discussion and have the rest of the community contribute. I personally think Kabuto and Yamato are worlds apart. Yamato had his DNA overrode by Hashirama's DNA whereas Kabuto's though unknown is probably mixed. Because of that I wouldn't list Orochimaru as his "genetic source".--Cerez365™

My bad, I meant to say Yamato's talk page... And I don't see where it states that Yamato's DNA was overrode by Hashirama's, but anyways... What you could have meant is that Hashirama's cells "took over" Yamato, something Kabuto tried to prevent when Orochimaru's cell tried to take over... But wouldn't the result be death?... Perhaps the other 59 childrens' bodies who were experimented upon could not "fight off" the First's DNA, thus resulting in their deaths... But somehow, Yamato's cells learned to control those cells, just as Kabuto's did...

While it's neither here nor there with me, Amaterasu is there because at the trivia says, it and black lightning are the only black coloured techniques or whatever. The point you added about the purple-coloured "Flapping Chidori" was out of place because it didn't link back to black lightning any at all and would be better in whichever article talks about flapping chidori.--Cerez365™

I moved that part to trivia because though the Daidarabocchi does sound like it influenced the creation of the Ten Tails somewhat. What was there didn't seem to follow what is generally in the influence section for characters. Kurama for example speaks about kitsunes and all while the Daidarabocchi is explaining a moniker. Now I'm not 100% sure I'm correct but possibly when more information is available we can add that to an influence section.--Cerez365™

Retrieved from "https://naruto.fandom.com/wiki/User_talk:D!ABLO-32?oldid=667026"
Community content is available under CC-BY-SA unless otherwise noted.