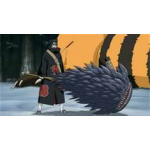 Hello Drew8324, greetings and welcome to the Narutopedia! Thanks for your edit to the Sarutobi Clan page.

Drew8324, when you edit a talk page or a forum, please remember to sign the post by typing four tildes (~~~~) or by clicking on

The problem is that saying that Senju were specialists with water is speculation. That two people from that clan could use water doesn't prove anything about the clans skill. The same goes for the Sarutobi, only two members has used fire (Konohamaru only used it in the anime, which is a less reliable source). However, that the Uchiha clan was skilled with fire has been stated in the manga, thus it is reliable. Jacce | Talk | Contributions 07:09, October 6, 2012 (UTC)

You forgot to sign your posts on my talk page. you use to use the ~ four time to sign your name. Anyway like I have said back on Obito talk page. He could be, but they aren't saiyans from DragonBall Z where they could have the same hair do. But if you are saying like for Naruto and Minato or the whole Nara clan. Some clans do have a hair style the is a sign for theirs clan. But for now he is juat an ancestor to the clan and not just Obito. If our Naruto world maker say they are from the same bloodline. Then sure. Hopemon (talk) 17:41, October 6, 2012 (UTC)

Re: Senju and Sarutobi

The information you've been adding to the articles is based on pure speculation. That is why it was removed. I don't believe I was the only one to do so as an Administrator has spoken to you about it previously. Now to explain to you:

Everything you left on my talkpage regarding this is speculation and you grasping at straws. Itachi is not the only person to use an element that they are not "affiliated" with. In fact Kakashi noted that it was common place for jōnin to have at least two or three. To clear up that Itachi fodder, his affinity like every other Uchiha was more than likely fire, because despite his demeanour it was something innate to him- written in his DNA if you like.

There is no need to send me another message regarding the Sarutobi because thus far, only two shinobi from the clan have used fire release canonically and in case you didn't know, fire release is common amongst Konoha shinobi.

To sum up, while it is fine to dream up stuff like that in your head, you need to stop adding fodder like that to the articles because it is based on pure speculation and inconsistencies. Not because you think you have "proof" means it's true. As for taking it up with an Admin, feel free. I doubt they'd disagree with me.

Konohamaru has never used fire release in the manga, that is why I said only two Sarutobi have canonically used Fire Release. I also do not believe that the nature transformations that people can use are based on their personalities. To my knowledge, that has never been stated or shown in the manga or anime.

As for your responses, please don't edit the last message section on my page, go back to the part about the discussion.--Cerez365™

Re: Senju and Sarutobi- Rehashed

Don't be an ass. All the Sarutobi have yet to be seen in the series so your conclusion is still speculative at best. The only clan known to hold an innate affinity towards an element is the Uchiha and their Fire Release.--Cerez365™

Kid, you never spoke to me before. That being said, I took a look at your past discussions, and this is what I have to say to you: get your head out of your ass. Your entire argument is nothing but a fallacy. Just because two people in a clan have a certain chakra nature, it does not automatically mean they all have. Prior to 612, we had never seen a greater part of the Sarutobi clan in action. Educate yourself and look up "hasty generalization". Regarding the Senju, educate yourself further: the reason they're called Senju is because they were masters of all sorts of techniques instead of focusing on a single branch of technique. Hasty generalization again. There are at least two Senju who have never displayed Water Release, those being Tsunade and Tōka. Omnibender - Talk - Contributions 15:47, December 9, 2012 (UTC)

You were the one who came back here and left snide remarks when you were still wrong. Accept your stupidity and let it die, don't bring it back up for everyone to see. If you're thirteen you shouldn't even be here.--Cerez365™

I lol'd, but you were actually half right, except the Senju stuff is nonsense. It was stated that Fire Release is common in Konoha, but in my opinion, it's because they had 2 fire oriented clans, Uchiha and Sarutobi. I don't think any other canonical character from Konoha has ever shown fire release besides a member from either of the two clans.--Elveonora (talk) 17:38, February 17, 2013 (UTC)

What does Tobirama, Wood Release and Senju in general having water release have in common?--Elveonora (talk) 23:30, February 17, 2013 (UTC)

Retrieved from "https://naruto.fandom.com/wiki/User_talk:Drew8324?oldid=747098"
Community content is available under CC-BY-SA unless otherwise noted.