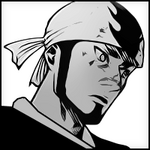 The name of that technique in Japanese is 大亀流五剣ノ雷電型 (Ōgame-ryū Goken no Ikazuchi-no-Kata). I would translate this as the Form of Thunder and Lightning of the Five Sword [Styles] of the Ōgama School.

Ōgama (大亀) literally means Great Turtle, by the way. The kanji used to write ikazuchi (雷電) literally mean thunder and lightning and would normally be pronounced as raiden. Ikazuchi is a Japanese word that can refer to both thunder and lightning and is usually written with just the kanji 雷, which in itself is usually pronounced as kaminari. --ShounenSuki (talk | contribs) 14:23, February 12, 2010 (UTC)

For stuff regarding those theories, I'd like to ask you to add your ideas to the tables' talk page, keeps things in the same places. Now, about your ideas. I've tried thinking something for glass for a while, but nothing ever felt right enough. I can't think of a way to make that without four elements (earth, fire, wind and ying). There was a swamp technique that was simple Earth Release, one used by Jiraiya. Han is said to use steam, so while I like it and it fits, I don't think it'll be a nature. More on that is explained at the tables' talk page. Omnibender - Talk - Contributions 23:08, February 10, 2011 (UTC)

Retrieved from "https://naruto.fandom.com/wiki/User_talk:Geohound?oldid=442215"
Community content is available under CC-BY-SA unless otherwise noted.