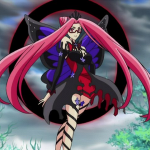 You really should read the image policy. You are excluding the licensing and not indicating the location in the media which you got the image from such as the episode or chapter and page numbers. Also, uploading manga images with english text is frowned upon. Simant (talk) 21:49, February 9, 2010 (UTC)

If an image is missing both license data and a fair use rationale, it CANNOT be used on articles. Please check that an image has the required data before adding it to an article. --Speysider (Talk Page) 18:23, May 17, 2012 (UTC)

I would urge you not to trust any source other than the original ones. 語悪寒咲く曽於 means language chill blooming former in. It's complete and utter nonsense. they even had the rōmaji wrong, since five senses is gokan (五感) and not gōkan.
Other fansites are as prone to mistakes and errors as this site is. Do not use them as sources. --ShounenSuki (talk | contribs) 17:08, March 28, 2010 (UTC)

Checking with me would only make sure that the Japanese is okay, but it still wouldn't guarantee that the name is good. You need to start using primary sources, although you could ask the people on the German Narutopedia for references and sources. --ShounenSuki (talk | contribs) 21:17, March 28, 2010 (UTC)

Fanbooks, databooks, the manga, the anime, games... Any place that has original, first-hand information. Sites like the German Narutopedia, LeafNinja, and Wikipedia all take their information from other sources and are not really reliable. --ShounenSuki (talk | contribs) 22:27, March 28, 2010 (UTC)

With a little luck you have taught him/her how to behave. So the question is, hand out a new chance or a block with a recommendation to read the policies? Jacce | Talk | Contributions 11:56, April 18, 2010 (UTC)

Hey, I see you reverted quite some bad edits. Here's a tip: instead of using the undo for every bad edit, just check the page history, and save the last good revision on top of the current one. It'll save you time. Omnibender - Talk - Contributions 16:11, April 18, 2010 (UTC)

By wonderful you mean high quality pictures? Or you mean i chosed the exact frame of the jutsu? Before you answer i'll tell you that im specialized in image uploading (since i don't know english well and i don't make good descriptions) and i use 780p and 1280p videos and programs that don't ruin the quality of the screenshot.--Znake2 (talk) 17:45, April 24, 2010 (UTC)

Hey, I see you used loads of undos to revert vandalism. Here's a tip that'll save you time. Instead of manually reverting the bad edits, look in the page history for the last good version of the article, and save that on top of the vandalized one. Omnibender - Talk - Contributions 22:30, May 8, 2010 (UTC)

Hi, I am writing because I see my page is under consideration for deletion.

I just wrote my page so I dont see how it can be under consideration for deletion already.

Furthermore, when I click on the link for deletion policy its says THAT page itself has been deleted.

Hey man, I was wondering if I could have rollback rights. I'm not completely active on this wiki but I am on others. Also, I am really mature and have stopped vandalizers before. This will really help me. Thanks! Reply on my talk page!--Red Dog31 (talk) 16:44, May 29, 2010 (UTC)

Kusanagi Sword: Chidori Katana it's the real name of the technique, listed in the databooks. If you want, you can add to "Trivia" that, despite calling it a Katana, it's a Chokuto--Kind-Hearted-One (talk) 14:16, May 16, 2010 (UTC)

yea u could leave it like that its just that since it was chokuto I thought the name should have been change.

You take pictures of this wiki, is not it? Please search your own images elsewhere, because it takes away the individuality of the Narutopedia.Eu. Okay?

Heller, uhm could you crop the watermark out of the Temari vs. Tenten image you uploaded o.O? It's against policy to have it there.--Cerez365™

Your edit on the Earth Release: Moving Earth Core was superb. I was the one who added the attack part on the page. You made it a thousand times better. Thanks man.Undominanthybrid (talk) 20:22, May 10, 2012 (UTC)

i don't know why, but reminding you to be aware.

i know video games and i'm not wrong. of course, he's not playable, but the opponent on the filler arc

Retrieved from "https://naruto.fandom.com/wiki/User_talk:Kind-Hearted-One?oldid=926221"
Community content is available under CC-BY-SA unless otherwise noted.