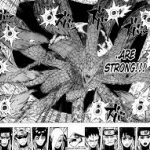 Hello KiritoLevel96Alicization, greetings and welcome to the Narutopedia! Thanks for your edit to the User talk:Cerez365 page.

There's a lot to do around here, so we hope you'll stay with us and make many more contributions. And again, welcome to Narutopedia. Please leave a message on my talk page if I can help with anything! -- TheUltimate3 (talk) 15:32, April 16, 2014 (UTC)

Re: Sasuke using all elements

The Rinnegan only gives you the ability to learn all 5 basic nature transformations. Having the Rinnegan doesn't automatically mean that he'll be listed as a user of all the elements simply because he hasn't used them.--Cerez365™

Adding fake or unverified information, as you did by S-ranking Lightning Transmission, will lead to a block. Omnibender - Talk - Contributions 23:24, June 23, 2014 (UTC)

Hello Omni, my apologies, I am merely seeking for ways to contribute to the wiki. I initially believed that "Lightning Transmission" was S-rank category because it is essentially an enhanced version of "Lightning Cutter." So please forgive me, I merely seek to contribute and assist in the growth of the wiki. --KiritoLevel96Alicization

Technique ranks come mostly from databooks, the only possible exceptions being if the ranks are explicitly mentioned in the manga or anime. Omnibender - Talk - Contributions 13:51, June 24, 2014 (UTC)

Madara in fact couldn't use Susanoo with Rinnegan. The reason he "did" was because Susanoo doesn't require any eyes whatsoever. And just because Sasuke's Rinnegan can use Sharingan powers and evolved from Sharingan doesn't mean Kaguya had Sharingan first too. Figure Rinnegan came first and Sharingan is what devolved from it--Elveonora (talk) 19:02, August 5, 2014 (UTC)

Kaguya's Rinnegan has Sharingan powers, so there's no need to add it to the infobox since the Rinnegan's already there, not to mention that every Rinnegan is basically a Sharingan.--

I understand, but the Rinnegan of Kaguya was once a Sharingan because it possesses the Sharingan's powers. So, should we add it? Madara can use Susano'o with Rinnegan and Sasuke can use Amaterasu with Rinnegan. --KiritoLevel96Alicization (talk) 18:55, August 5, 2014 (UTC)

It's already mentioned there. And her Rinnegan wasn't a Sharingan once, she gained it right after eating the Chakra Fruit.--

Re: Naruto VS Sasuke

Madara claimed his the power of his Perfect Susanoo was comparable to a bijū. As the most arrogant character in the series, his boasts cannot be taken as canonical fact. Any statement that seems boastful ought to be taken with a pinch of salt. Don't forget Amaterasu flames were compared to the sun at some point.

The bijū are sentient masses of near infinite chakra. No Susanoo of any kind is stronger. Exceptional shinobi like Madara can beat them, but a PS by itself, is vastly inferior and simply cannot be stronger.

Sasuke has no feats that put him above BM Naruto. Not a single one. When it comes to speed, strength, endurance and jutsu, Naruto has him beat easily.--Reliops (talk) 00:44, September 8, 2014 (UTC)

Umm, sure hit me, although i have my own. I think every rinnegan has it's own abilities like the Sharingan. They all share some but for the most part, they're all unique. Riptide240 (talk) 01:38, September 7, 2014 (UTC)

Sasuke is a mad man, it's that simply, bro.

Listen dude, as I said before, the look on Sasuke's face when he said he's going to kill the 5 kage, looks like the face of a madman, the look on his face when he said revolution, also looks like the face of a madman, he's planning on killing 5 important learders of the world for him to take over, rather than giving them a chance to learn from there mastakes and get better.

He hasn't changed at all, and he will die, talk no jutsu has been used too much, it shouldn't be that easy.

Ask yourself this, Has Batman ever got the Joker to be good.

The writing is just too unrealistic.

Do you think Obama can use talk-no jutsu on Bin Laden.

Like I said, talk no jutsu is not as convincing as how Kishimoto brings it out, it hardly ever was.

Finally, I thought I was the only one who wanted him to live, but as for Sasuke, I just don't feel it bro for him to live, his misery should end by Naruto's hand.

if it was just indra and asura's chakra then sasuke would have the advantage but its not. they are equal with Indra and Asura's influence over there power but they are far from equal with the tailed beasts influence on Naruto. Also its not the Juubi's eye it is simply a red Rinnegan with Tamoe the juubi was simply Kaguya's demonic form and even then not once do they call her eye a Rinnegan the manga states she had the byakugan and Sharingan. people calling her eye a Rinnegan are simply assuming

If we go by Forneverworld's theory than Sasuke can live, if we don't, then Sasuke must die, unless if Kishimoto's got the most incredible reason why he even listened to Naruto.

However it would be interesting if Naruto and Sasuke teamed up for the last,final time and final battle against Lord Jashin, and Naruto will have accomplished his final form(Bijuu way, not Chakra way) as for Sasuke he will need both rinnegan to help Naruto defeat Jashin.

Heck Hot mama Kaguya can join in too and help them fight Jashin.

Also I think Jashin will look alot like the Curse mark 2 form, with some unique twists to it, and his eyes will look like his symbol.

Then he can have the last 3 for his other Rinnegan

Which he needs those extra ones

I've seen you post on other's talkpages. I've heard you out enough. Do not, I repeat, do NOT do such edits again. --WindStar7125

Yay,April in the house~Good to speak to you :DSooooo...O genki desu ka? —This unsigned comment was made by Rainbow April (talk • contribs) .

Retrieved from "https://naruto.fandom.com/wiki/User_talk:KiritoLevel96Alicization?oldid=960338"
Community content is available under CC-BY-SA unless otherwise noted.