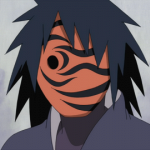 Hello Mad6, greetings and welcome to the Narutopedia! Thanks for your edit to the Steaming Danger Tyranny page.

While probable, we still have no evidence that Tengai Shinsei is a Deva Path technique. I suggest you take a look at discussions regarding how to translate this technique in its talk page. Omnibender - Talk - Contributions 15:49, April 21, 2013 (UTC)

Not sure where you're getting them from, but some of them are conflicting with the only accurate source I was able to find. Omnibender - Talk - Contributions 16:37, April 27, 2013 (UTC)

Firstly, this is not the place to talk about it. This is the canon Naruto Wiki, so you need to take it elsewhere. As to your ban there, it is because you edited a page that had a warning in giant, bold, red letters saying "Do Not Edit With Form", which you did, which, in turn, massively damaged the code on that page and affected several others. Since I see you'd barely made 30 edits, and no one in the community knew who you were or why you did it, it was considered vandalism, and you were blocked. That's how it'll remain. ~ Ten Tailed Fox

Almost a year ago, you added kanji and romaji to this technique. At that time, I removed it even though the translation fits perfectly, a rather rare case with video game translations, I couldn't find any source for it. All Japanese game-play videos that featured the fight didn't give a chance for the Kazekage to use the technique, and when I looked up the kanji, all the results either didn't have sources themselves, or were part of fanfic. Do you have any source for that kanji? I'm kinda hoping that screenshots from Storm Revolution will still show this as his technique, but if you could produce any viable source for the kanji, that would be appreciated. Omnibender - Talk - Contributions 16:29, February 9, 2014 (UTC)

I suggest you abide by this policy and change your mad signatures. And if you respond on a talkpage with that signature again, you'll be slapped with another warning template, buddy. • WindStar7125 [Mod]

If the Literal English is the same as that of the article title, there is no reason to place it. That's only there if the full literal translation goes longer than the article title (example: Susanoo). --Sajuuk [Mod] Talk Page | Contribs | Channel 13:03, November 5, 2014 (UTC)

Hey, please wait with using names from the databook until I finished translating them. I don't want to move every other article if it's wrong. :/ • Seelentau 愛 議 17:15, November 5, 2014 (UTC)

Can you possibly not just go around moving articles to Literal English translations without discussion first? Not every page needs to use the literal translation, so there's no reason to move articles to use them. --Sajuuk [Mod] talk | contribs | Channel 09:52, April 13, 2015 (UTC)

Retrieved from "https://naruto.fandom.com/wiki/User_talk:Mad6?oldid=1034690"
Community content is available under CC-BY-SA unless otherwise noted.