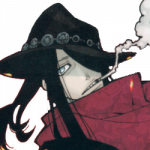 You already brought that up back in 2015 at that clan's talk page. The mention of clans for Hatake and Yuhi doesn't exist in the original Japanese, as confirmed by Seelentau, meaning the only source that explicitly contextualises the Hatake as a shinobi clan is still the Michi. Omnibender - Talk - Contributions 22:19, April 12, 2019 (UTC)

Umishiru commented on the Viz translation of a scene mentioning Hatake, Yuhi and Sarutobi clans in chapter 34. You added Hiruzen mentioning them, which he didn't by the way (the jonin simply mention their own full names), and Seelentau says there's no mention of clans. Snapper later corrected that the scene people were talking about takes place in chapter 35. Point being, the mention of clans only exists in the Viz translation, there's no mention of clans in the original Japanese, it's a faulty translation where liberties were taken. Otherwise we would have had a Hatake clan since long before 2015, and we would have had a Yuhi clan article as well. I also just checked the corresponding anime episode, there's no "ichizoku" anywhere in the corresponding scene. Omnibender - Talk - Contributions 22:56, April 12, 2019 (UTC)

Double check if you must, but I find it highly unlikely they'd have changed something like this for no reason in the anime. Omnibender - Talk - Contributions 01:07, April 13, 2019 (UTC)

They are indeed sentences in and of themselves because they are describing the image, no matter how short the text is - it's just the same as having a period in a caption that uses a "normal" sentence. On top of that, the format used consistently over the wiki is important, it sets a standard of conformity. If you're going to remove the periods from the captions of those four articles, then you'd have to remove them from every article they're found on, including every country article, every minor location, and every other article that uses that format (which would still be wrong because all captions should include periods, not to mention it goes against the wiki's consistency). NinjaFatGuy (talk) 18:45, September 14, 2020 (UTC)

Nonetheless my opinion or yours, that's the consistent format on the wiki. I'm going to revert your edits again in the hopes you don't cause an edit war over your opinion versus the wiki's format. If you don't think captions without complete sentences need a period, then I'd suggest asking an administrator to see if they're okay with making a big change on the wiki's format. In the meantime, I'm gonna revert your edits for the sake of the wiki's conformity. NinjaFatGuy (talk) 19:01, September 14, 2020 (UTC)

Considering you'd be editing hundreds of articles and flooding the recent activity to change the format of the wiki without an administrator or the community's consent, then yes, it is a big change. Not to mention I said I was gonna revert your edits in the hopes that an edit war wouldn't start, didn't say it's currently an edit war. NinjaFatGuy (talk) 19:10, September 14, 2020 (UTC)
Actually I did make it sound like that with my edit summary, which wasn't my intention, so my apologies. NinjaFatGuy (talk) 19:12, September 14, 2020 (UTC)

Yeah, basically. It talks about how before the era of the Fifth Mizukage the village was known as the "Blood Mist" and talks about how severe and nightmarish conditions were. The captions say that Zabuza opposed the circumstances in the village and attempted a coup d'état, and that the Fourth Mizukage was being manipulated by the Akatsuki behind-the-scenes. FF-Suzaku (talk) 23:11, September 14, 2020 (UTC)

No, first caption says Zabuza attempted a coup, second caption says the Fourth was being manipulated. It doesn't explicitly connect the two, though you can infer that they were connected. FF-Suzaku (talk) 03:00, September 22, 2020 (UTC)

Retrieved from "https://naruto.fandom.com/wiki/User_talk:Munchvtec?oldid=1370069"
Community content is available under CC-BY-SA unless otherwise noted.