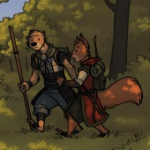 Hello Shieldmaiden, greetings and welcome to the Narutopedia! Thanks for your edit to the Iruka Umino page.

We tend to only list some jutsus when the user has it as signature jutsu or is especially skilled with it. Body Flicker Technique, Body Replacement Technique, Clone Technique, Transformation Technique, Tree Climbing Practice, Water Surface Walking Practice and some others are jutsus that pretty much every ninja can use, so listing them aren't necessary. Some exceptions are Shisui Uchiha, who apparently could use Body flicker at a advanced degree, and Tsunade, who is constantly using a advanced form of the transformation technique. We also don't lists techniques from movies and games, as the are considered non-canon. Jacce | Talk 13:58, December 11, 2009 (UTC)

There are also databooks (3 so far) and fanbooks (2 so far), that is written by the author himself, that contains some info not find in the manga or anime. ShounenSuki keeps track on them, ask him if something seams strange. Jacce | Talk 16:34, December 12, 2009 (UTC)

Retrieved from "https://naruto.fandom.com/wiki/User_talk:Shieldmaiden?oldid=222415"
Community content is available under CC-BY-SA unless otherwise noted.