Jigen informs the rest of Kara they have lost the "vessel". Two members lament the wasted time, effort, and money wasted on it. An elder member, Victor, presumes it was an accident during transportation, and proposes locating and recovering it at once. Another member attributes failure to such a perception, causing Victor to threaten him. Jigen points out that while time loss is something that can be accounted for, this was a case of preventable human error. Delta says it is a discussion on how the responsible party will pay their debt. Victor asks about a still absent member, Amado, a concern shared by Jigen, who decides their plans should go forward as planned over Victor's objections. Victor wishes to mobilise an Outer to collect data on the new scientific ninja weapon, cursing at the situation caused by Momoshiki Ōtsutsuki.

Koji Kashin, the one who criticised Victor, asks to deal with the situation, as the area in question is under his responsibility, to Victor's dismay. Koji thinks the aircraft has crashed, and fighting will be inevitable. Jigen agrees with Koji, and asks the other Inners their opinions, they agree with Koji. Koji tells Victor to contact the Outer. Victor tries protesting, but Jigen will not have it, and that the "vessel" is key for their goals, as the projections of other Kara members begin disappearing, and to recover it. The other members gone, the angry Victor mentions if it wasn't for the Genjutsu Communication, he'd have blown Koji's head up. Koji replies to his comment, Victor asks how long he's been there, startled. Koji says he's been there since before the meeting began, questioning Victor's senses. Victor tries attacking him, but Koji lands a kunai on his shoulder. Victor tries weaving hand seals, but Koji activates his own jutsu, the True Fire of Samadhi, which he claims even Victor's regeneration jutsu can't overcome. The flames consume him. Koji thinks about Konoha and the Land of Fire. At Konoha, Boruto spars against Naruto. Boruto distracts Naruto with two shadow clones, which Naruto easily defeats, and positions himself behind Naruto, sending a Rasengan his way. Naruto waves at it and it vanishes, to everyone's confusion. Naruto compliments Boruto's Rasengan. Boruto sends an electrified wave his way, to his classmates' amazement. Naruto blocks it by raising an earth wall. Naruto punches through the wall with his prosthetic hand, and absorbs the charged water. Mitsuki notes it was the same with the Rasengan. Boruto watches the hand on the wall, and Naruto surprises him from behind, landing a kick. Shikamaru declares the sparring over. Shikadai and Inojin discuss the battle. Boruto notices Naruto's missing hand. Sarada and Mitsuki discuss Naruto's distraction, and how his hand was able to absorb jutsu. At the Hokage's office, Boruto calls Naruto out for using a scientific ninja weapon when he previously considered it cheating when Boruto used them. Shikamaru reminds Boruto that testing the tool was the point of the sparring. Naruto tells him this is one of Katasuke's prototypes, inspired by the latest conflict with the Ōtsutsuki, but they have only been able to make it absorb jutsu, not release them like Momoshiki could. Sasuke chides Boruto for not understanding the situation, that the device itself isn't, and the point is the circumstances of its use. Sasuke says that the Ōtsutsuki have proved the crisis in the world still isn't over. Elsewhere, Konohamaru arrives at the crash site of a blimp, the Horse, and noting no signs of survivors, decides to investigate inside. He finds an empty container, and his radio gives out. Another shinobi asks Konohamaru about it, and Konohamaru has a bad feeling about it. Something approaches the crash site. 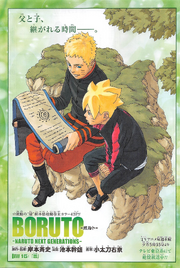