A much more powerful version of the Water Release: Five Feeding Sharks, where the user creates one thousand sharks out of water that replicates a giant wave to swarm down and attack the opponent. 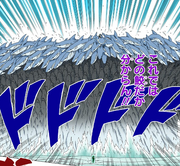