The White Secret Technique: The Chikamatsu Collection of Ten Puppets is a ninjutsu which was invented by Monzaemon Chikamatsu.

After unravelling the carrying scroll, the Chikamatsu Collection appears from the gate (門, mon) crest. Using the Puppet Technique to manipulate them at will is what is known as the "an amount matching ones fingers" (指に数, Yubi ni sū) method. With this puppet collection it is literally possible to use one puppet with each finger — each boasting a power matching a thousand puppets put together. However, to use all of these secret mechanisms demands extremely high-class expertise and skill.

These ten puppets were created by the first puppeteer Monzaemon Chikamatsu and later came into Chiyo's possession, the use of which earned her great fame. These puppets are very powerful, as Sasori claimed that there were rumours that they had been used to take down an entire castle at one point in time.[2] The Chikamatsu Collection has terrifying prowess in taijutsu, ninjutsu, bukijutsu, and so on. Furthermore, as they can change their numbers by combining, the number of abilities they can show becomes even greater. The puppets were constructed in such a way that they all can work in tandem with each other both offensively and defensively. 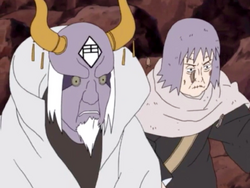 Puppet 1: This puppet somewhat resembled an "oni" (demon). Though it displayed no weaponry or hidden mechanisms, it had huge fists and immense striking power which Chiyo used to fend off attackers. It always kept closer to Chiyo in case it was needed as defence while she operated the other puppets. 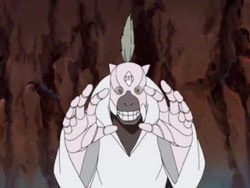 Puppet 2: This puppet had grey markings around its mouth area and hair coming from a single point on its head. It was shown to have colossal fists and fierce taijutsu skills. In the anime it was able to extend its arms to form a sort of cage to trap opponents, where it would then launch four small bombs from its mouth. Since the explosion was accurate and very small, it dealt a great amount of damage to enemies whilst not damaging the cage. 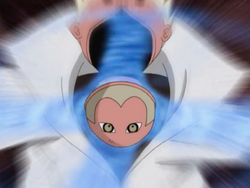 Puppet 3: This puppet had a red face with white hair. It was used in conjunction with the black-haired puppet. It is able to lift a section of its face to reveal a spinning orb with four large chakra blades. Since these blades are made of chakra and spin rapidly, even a scrape can prove deadly. It is wielded like a weapon by its partner. 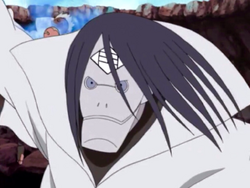 Puppet 4: This puppet had long, black hair and works in conjunction with the red puppet. It is able to extend its hand via a chain, connecting with its partner's hand to hurl it around like a yo-yo, thus being able to slice through targets quickly and effectively. However, if one were to be destroyed, the other would become vulnerable. 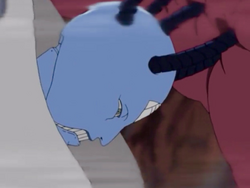 Puppet 5: A bald puppet with large holes in its skull. This puppet's hidden weapons are the long extending cables coiled in its skull that can pierce numerous enemies at a time. Since the range is very long, it can pierce distant targets without even getting close. Also, it is able to latch onto opponents with its cords and then crumble them slowly. It can also use taijutsu to fight, but lacks brute force. 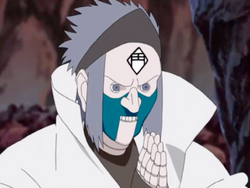 Puppet 6: This puppet had spiky hair and the lower half of its face was green in colour. It had the kanji for "Sangha" (僧, Sō) in its mouth, and worked in conjunction with the Buddha and Dharma puppets to use the Three Jewels Suction Crushing technique. 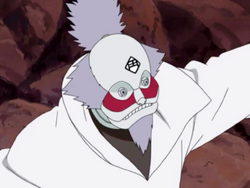 Puppet 7: This puppet had a ponytail, a beard, red markings under its eyes and the kanji for "Dharma" (法, Hō) in its mouth, and worked with the Buddha and Sangha puppets to use the Three Jewels Suction Crushing technique. 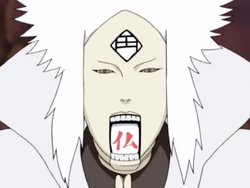 Puppet 8: This puppet had white hair and large sideburns with the kanji for "Buddha" (仏, Butsu) in its mouth which activated the Three Jewels Suction Crushing technique when used in conjunction with the Dharma and Sangha puppets. 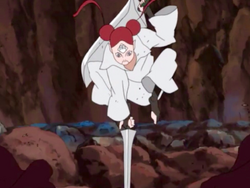 Puppet 9: This puppet was modelled after a female with red hair tied into buns. It wielded two large broad-swords and was capable of cleaving through enemies with ease, although the sheer size of the weapons reduced the puppet's dexterity somewhat. This puppet was one of the main attackers, and could fend off even the strongest of enemies at an alarming rate. 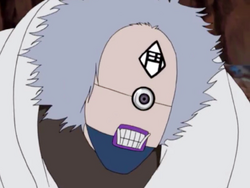 Puppet 10: The final puppet had one eye, and was capable of releasing an orb from its mouth used for the Sealing Technique: Lion Closing Roar.

Retrieved from "https://naruto.fandom.com/wiki/White_Secret_Technique:_The_Chikamatsu_Collection_of_Ten_Puppets?oldid=1318699"
Community content is available under CC-BY-SA unless otherwise noted.