He is the former daimyō of the Land of Wind (風の国の大名, Kaze no Kuni no Daimyō).

The former daimyō of the Land of Wind has been described as being deeply religious and hedonistic.[1] He is also quite frugal, as he reduced funding for Sunagakure, the village of his land, and outsourced many jobs to the less expensive Konohagakure; this led him to be highly unpopular with Suna's citizens, leaving them to believe he was trying to get rid of them and attempted a revolution to induce fear into the daimyō by destroying Konoha.

He wears a purple garb over a brown kimono and a purple hat to match, not the standard attire of the daimyō of the Five Great Shinobi Countries. He keeps his black facial hair in the form of a goatee.[2]

He had become very unpopular among Sunagakure shinobi after reducing the funding of the country's hidden village; he outsourced many jobs to Konohagakure. This had caused many to believe that he was trying to do away with Suna. This prompted Sunagakure to take part in the Konoha Crush.

For undisclosed reasons, he has been replaced by another daimyō by Part II. 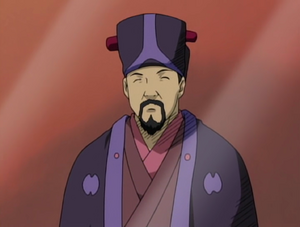