By manipulating the wind-natured chakra of the Wind Release: Rasengan, Naruto was able to create four large points, causing the Rasengan to take on the appearance of a giant fūma shuriken, with the Rasengan in the centre remaining a perfect sphere. The technique gives off a loud screech-like noise during and after its formation. In order to perform it, Naruto requires the aid of two shadow clones; he provides the chakra, one clone is responsible for the shape transformation, and the other provides the nature transformation.

The Rasenshuriken creates countless microscopic wind-blades that severely damage the body on a cellular level. It produces so many individual strikes that even Kakashi Hatake is unable to count them all with his Sharingan.[3] The wind-blades sever all nerve channels in the body, leaving the target unable to move after being struck. They also attack the entire chakra circulatory system, which cannot be repaired by any form of medical ninjutsu whatsoever.[4] Depending on the severity of the damage, the victim may not be able to perform a technique ever again. Because the Rasenshuriken does cellular damage to Naruto's arm when he first uses the technique without throwing it, Tsunade labelled it a kinjutsu and likens the technique's effects to that of poison.[5]

When Naruto first uses the Rasenshuriken against Kakuzu, the latter is caught in a vortex of countless microscopic wind-blades destroying two of his hearts.[6] Other than the severe damage done to his cells, Kakuzu's body is left intact after being struck. After Naruto learns to throw the Rasenshuriken, the damage is greatly increased; not only is it capable of cutting through rock,[7] but when Pain's Human Path is struck by it, most of its body is disintegrated, leaving only the top part of its head.[8] It was even able to damage beings like Kurama and momentarily stun it.[9] Even though it can now be thrown, it can still be thrust into the opponent.[10][11] 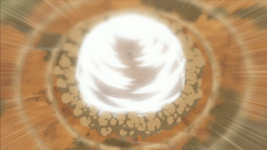 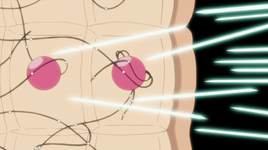 Rasenshuriken's effect.
Add a photo to this gallery

Naruto later improved the Rasenshuriken with Sage Mode. This allows him to throw it at his opponents, and removes the threat of damaging himself with the technique. Another improvement is that the shuriken now expands after it has been thrown, compensating for imprecise aim or fleeing opponents by widening the area of effect. However, he can throw the Rasenshuriken quickly enough that this is rarely necessary. When thrown, the Rasenshuriken becomes Naruto's quickest attack, able to cross an entire Chibaku Tensei crater — which was roughly the size of a small mountain range — in less than a single second. When it exploded, it took up a large part of that same area.[12] Naruto can also use this through the Shadow Shuriken Technique.[13]

Naruto can also create and throw two Rasenshuriken with both of his hands in Tailed Beast Mode without the aid of his shadow clones, their cutting power increases tremendously to such an extent that one of them could even sever the Ten-Tails' extremely durable tails with relative ease.[15]

In Sage Mode, he became skilled enough to create a larger Rasenshuriken that can grow to tremendous proportions, which is strong enough to completely immobilise Madara Uchiha long enough for Hashirama Senju to pin him down.

After befriending the tailed beasts and gaining their chakra, Naruto can add Son Gokū's lava-natured chakra to his Rasenshuriken and—with the addition of Sage Mode—can use it to perform his Sage Art: Lava Release Rasenshuriken technique.[16] He can also infuse his wind nature chakra with a Tailed Beast Ball and Truth-Seeking Ball using chakra donated by Kurama, to create the Tailed Beast Ball Rasenshuriken, a technique which was powerful enough to destroy multiple satellites created by Madara's Chibaku Tensei technique with ease. Naruto is also able to use each of the special abilities and chakra natures of the other specific tailed beasts.

In the beginning, the Rasenshuriken required a great deal of chakra to perform, and after creating it three times, using his own chakra, left Naruto extremely fatigued. However, it requires a good deal more chakra to both create and then throw it, which, while in Sage Mode, can be used twice in addition to other Rasengan variants, with a known maximum of three times.[17] This indicates that a thrown Rasenshuriken takes up approximately a third of his sage chakra. He must then re-enter Sage Mode before using the technique again.

In addition to having the Rasenshuriken damage his arm, Naruto had difficulty maintaining the Rasenshuriken's stability when he first used it. It was prone to dissipating before Naruto could reach his target, requiring that he use it as a melee weapon and force it into the opponent, just as he does with the usual Rasengan.

Retrieved from "https://naruto.fandom.com/wiki/Wind_Release:_Rasenshuriken?oldid=985235"
Community content is available under CC-BY-SA unless otherwise noted.