He has short spiky black hair and small black eyes. His outfit consists of a dark violet vest, with two scrolls attached to it, a light violet turtleneck, and dark green-coloured pants. He wears a blue forehead protector.

Yōrō is capable of launching a barrage of shuriken shadow clones at opponents. The fact that he seemingly does not require hand seals to perform this technique, suggests that he has excellent chakra control.

Yōrō and Kegon were instructed by Shibuki to hide their jōnin status, and protect Fū while she's attending the Chūnin Exams in Konohagakure. Once entering the exams, Yōrō and his teammates were randomly split into different rooms, with him being placed in room 3 during the written test. On monitor, Shikamaru Nara as proctor explained that everyone only needs to answer one question on the test but their combined score with their teammates will determine if they pass or fail the exam as they need exactly 100 points to pass. While everyone else began panicking on how to pass, Fū communicated with her teammates which question each to answer.[1]

With the conclusion of the three question choice test, Shikamaru revealed a bonus question, asking to which teammate you would leave to be a decoy. The answer had to be unanimous with the person picked being disqualified. His team was able to qualify for the second round by not answering which proved to be the right choice as all members of a team would need to be present for the second round. However, a preliminary round had to be held to lessen the many participants there were. The preliminary round involved a race to Sunagakure with only the first 30 teams qualifying for the primary second round. His team was the first to move out, ultimately arriving at their destination first.[2] At the checkpoint base, he and Kegon locked Fū in her room to keep her from doing something troublesome, though she managed to escape anyways. After finding Fū, who took a giant scorpion down saving Team Asuma, Kegon and Yōrō took her back with them. The next day, Temari — the second proctor, announced the start of the second phase that would be held within Demon Desert.[3]

Later, despite gaining both needed scrolls, Fū was determined to no end this exam before making some friends. She was convinced however to complete the exam when reminded she was taking the exams for Shibuki's sake. Soon afterwards, a massive sandstorm rampaged the area. Hearing people shouting for help, Fū quickly rushed out to find them, much to Yōrō's annoyance.[4] Later, despite catching up with Fū, the jinchūriki again ran off, deeply troubled, leaving Kegon and Yōrō annoyed and confused.[5] The two later caught up with Fū only to discover she, along with the Kazekage, were having their respective tailed beasts extracted by the Suna-nin Hōichi. Upon seeing Team Guy arrive and admitting to knowing Fū's true identy as a jinchūriki, Kegon and Yōrō prepared to fight off the other team. There were quickly however surprised when Neji expressed a genuine desire to help save Fū and the Kazekage. Yōrō and Kegon joined in attacking Hōichi as a distraction while Neji went after the jinchūriki. Using his Gentle Fist, Neji was able to block the chakra point from which the tailed beasts were being extracted. This lead to the chakra chains embedded in the jinchūriki to be removed and ultimate attack their castor in Hōichi. With the enemy defeated and the crisis averted, Yōrō joined in laughing at Neji's awkwardness from Fū asking him to be her friend.[6]

Ultimately, the Chūnin Exams were ended early before starting the finals due to controversy happening in the second exam. Sometime afterwards, Akatsuki members Kakuzu and Hidan tracked the team down to capture Fū. It is unknown if Yōrō survived the encounter.[7] 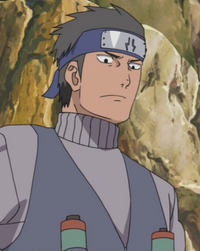