Yūki Minazuki (水無月ユウキ, Minazuki Yūki) is a jōnin from Konohagakure and the leader of Team 2.

According to Danzō Shimura, Yūki had been placed in charge of a number of different genin teams over the years. Every time one of his students proved to be more talented than he was, he would find some reason to send them back to the Academy; Danzō believed Yūki did this out of jealousy.

When Yūki was first placed in charge of Team 2, it consisted of Itachi Uchiha, Tenma Izumo, and Shinko Inari, all recently graduated from the Academy. He tried to give a routine speech to the team during their first meeting, but was quickly taken aback by the team's dynamics: Tenma was jealous of Itachi, Shinko was critical of Tenma's jealousy, and Itachi wasn't interested in the meet-and-greet that Yūki had in mind. Despite these poor first impressions, the team nevertheless performed well, due primarily to Itachi; during the Hyūga Affair, Team 2 was assigned to capture a spy from Iwagakure, as their team (Itachi specifically) was the best that Konoha could spare. During that mission, as ever, the team bickered with each other and, as ever, Yūki was unable to assert himself and keep the peace.

A year after Team 2's formation, Yūki declined to enter his students in the Chūnin Exams; although Itachi was more than qualified, Tenma and Shinko were not ready for the exams' ordeals. Itachi confronted Yūki about this, which Yūki was uncharacteristically defensive about, being entirely unswayed by Itachi's efforts to change his mind. Nevertheless, the team's year together was distinguished enough to be given the ceremonial task of guarding the Fire Daimyō during his annual visit to Konoha. Yūki's main concern during the mission was getting the daimyō to Konoha on time, as the roads were expected to be free of danger. When Itachi noticed the masked man approaching them and pointed him out to Yūki, Yūki intercepted the man and questioned him. The man's demeanour seemed non-threatening, causing Yūki to let his guard down, making him an easy target for the man's genjutsu.

Itachi was able to drive off the masked man, but Tenma was killed. In the aftermath, Shinko decided to resign as a ninja, too disturbed by what happened to Tenma. They were replaced by two more Academy graduates, Himuka Suzukaze and Yōji Aburame. This iteration of the team got along much better than the previous one, as Yōji did not speak and Himuka was awed by Itachi's skills. As before, the team developed a stellar performance record, but Yūki was once again unwilling to enter them in the Chūnin Exams. After hearing about this, Danzō became concerned that Yūki was planning to send Itachi back to the Academy as he'd done with so many others. He convinced the Third Hokage to overrule Yūki and allow Itachi to take the Chūnin Exams by himself.

Itachi completed the exams, becoming a chūnin, for which reason he left Team 2. Yōji also left the team shortly afterwards, mysteriously. Himuka remained, and after two more Academy graduates were assigned to the team, Yūki resumed his job of leading them.

Although most of Konoha viewed Yūki as a competent teacher, Danzō noted Yūki has a petty, jealous streak, and does not take kindly to prospective genin who outclass him in skill. In the anime, a ninneko says Yūki wasn't very popular with women.

Yūki is described as having a burnished face. He has short dark hair, unkempt eyebrows, round eyes like a fish's, large nostrils, and thick lips with an unusually small mouth. The anime depicts him as having a goatee. 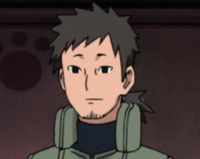