Yūkimaru lived with his mother in a village that was attacked by Orochimaru's followers when Yūkimaru was a child. Guren was one of the ninja raiding the village for Orochimaru, killing everyone she came across. When she collapsed, it was Yūkimaru's mother who tended her. When Guren woke up, she said she would spare her as an act of gratefulness towards the kind woman. However, Guren still had to follow Orochimaru's orders, and when they met again, Guren had to kill her to keep Orochimaru's approval. When Yūkimaru's mother fell, her blood spilt onto the camellias nearby. Their pure white colour was changed to red as the blood was absorbed by the camellia.

Yūkimaru is a quiet and gentle boy. When asking Naruto where his home was, he was told that home is a place where people think about him, which lightened his spirit. In the end, he decided that his home was with Guren, having formed a close bond with her, akin to that of a mother and son.

Yūkimaru has magenta eyes and long pale-green hair. His outfit consisted of a kimono with a jade-green inside and a grey outside along with cadet-blue pants with bandages down to his ankles. In contrast to regular shinobi sandals, his were low cut and dark brown. When he was travelling with Kabuto and later Guren to the lake where the Three-Tails was, he wears a blue cloak.

For an unknown reason, Yūkimaru has the ability to partially control the Three-Tails. By use of pills given to him by Kabuto, he can summon the Three-Tails. At first he could only make an apparition of the beast appear, after taking some of Kabuto's pills. Later, after taking a larger dosage of the pills, combined with Guren's Crystal Release, he is able to make the beast fully appear, but couldn't control it. Yūkimaru can also control the Three-Tails for a short while without the aid of Kabuto's pills, as when he restrained it when Guren was in danger of being harmed. When Guren seemingly sacrificed her life to save him, Yūkimaru lost control of himself and used his powers to the fullest which enhanced the Three-Tails strength and rampage enabling it to break through the Four-Corner Sealing Barrier. His abilities seem to be tied to his emotions.

Besides being able to control the Three-Tails, Yūkimaru can create a thick mist that completely envelopes the surrounding area, thus allowing him to slip away without the risk of being followed. It also enables the user and his comrades to attack unseen.

Yūkimaru first appeared, picking white camellias where Sasuke was training at the waterfall until Kabuto came here, looking for him.

Later taking him to the misty lake, Kabuto conducted an experiment on Yūkimaru by forcibly releasing his chakra, partially calling forth the Three-Tails. Kabuto was satisfied with the results, and took an exhausted Yūkimaru to Yugakure to rest. There, Yūkimaru met Naruto Uzumaki, and they had a brief discussion about bonds. Soon afterwards, he was sent on a mission with Guren, but became sick along the way. Guren took care of him and they grew close, Guren reminding him of his mother. Guren gave him a crystallised camellia, telling him that it would never wither for as long as she was alive. Once he got better he ran into Naruto again, who offered to take Yūkimaru back to Konoha. Yūkimaru politely declined, as he felt his place was with Guren.

Later, Kabuto conducted another experiment with Yūkimaru; by consuming more pills than the first time, he was able to completely summon the Three-Tails. The strain caused his nose and ears to bleed, and he soon passed out, causing the beast to go on a rampage. When he woke up, he found Guren fighting the beast in order to protect him. Yūkimaru used his remaining strength to keep it away from her, but they were quickly washed away by the Three-Tails.

After recovering from the ordeal, Yūkimaru found Guren and Naruto arguing over him. Yūkimaru told Naruto that he was happy to have met him, because now he had a place to be: with Guren. When Guren engaged the Three-Tails again, Yūkimaru restrained it without the aid of Kabuto's pills for a short while. The beast escaped from his control, however, and Yūkimaru passed out. A group of Konoha ninja found and attended to him, and when he came to he told them that Guren and Naruto had been eaten by the Three-Tails. Yūkimaru helped them locate the beast and, after finding it, went to hide with Sai. He was quickly captured by Rinji.

Taking advantage of Yūkimaru's feelings for Guren, Rinji convinced Yūkimaru to take more of Kabuto's special pills and use his powers to control the Three-Tails. He used all of his strength to bring the Three-Tails to their location, and as he collapsed, he was caught by Guren. Rinji went on to inform Yūkimaru of the fact that Guren had killed his mother, something Guren admitted to. Yūkimaru was speechless, but Naruto interjected, speaking on behalf of Guren by telling Yūkimaru how much she had changed. While the past Guren had committed terrible sins, this Guren was regretful of her past transgressions. Guren added that, if he would allow it, she would protect him forever, to which Yūkimaru accepted.

Rinji attacked them, in doing so revealing himself as Kabuto. Kabuto explained what Guren and Yūkimaru's purpose was for the two of them to get close and become dear to one another so when Yūkimaru learned of Guren's murder of his mother, he would use his anger to make his power explode, although he was visibly surprised this hadn't occurred. He continued to speak about the violent future ahead for the entirety of the ninja world, and that being their reason for using Yūkimaru to gain the Three Tails.

While Naruto fought with Kabuto, Guren and Yūkimaru fled. Kabuto sent Rinji's reanimated corpse after them, so Guren defended Yūkimaru. When her Crystal Release attacks proved futile against Rinji's bats, Guren encased herself and Rinji in crystal, and they fell into the lake. Believing Guren to be dead, Yūkimaru let loose his power, driving the Three-Tails into a frenzy, and shattering the seal the Konoha ninja were very close to completing. Once the beast was driven off, Naruto found Yūkimaru, and brought him back to the other Konoha ninja to rest. Whilst there they discovered that his body had not been able to handle the strain, and he had lost his ability to control the Three-Tails.

Yūkimaru awakened to find the crystal Guren had given him fully repaired and glowing. He rushed off into the night to find her. Naruto, after realising he was gone, went to search for him but when he found Guren's crystal left in a patch of bushes, unblemished, he knew where Yūkimaru had gone, and decided to leave him be. He put forth this point to the rest of the Konoha ninja the following morning, deterring them from searching for Yūkimaru. As the Konoha ninja were leaving, Yūkimaru, alongside Guren and Gozu, looked down upon them, and Naruto saw them walk away. Yūkimaru was seen holding Guren's hand as they walked into the distance.

After the final battle between Naruto and Sasuke, Yūkimaru, Guren and Gozu can be seen in the crowd at the entrance to Konohagakure. 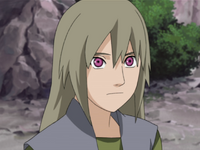