As a Suna ninja, he served as a trusted member of the Kazekage advisory council of Suna for four years. At some point in the past, he became a sleeper agent for Sasori, under the influence of his Memory-Concealing Manipulative Sand Technique.

When it was agreed between the Fifth Hokage and Gaara, the newly appointed Fifth Kazekage, to host an early Chūnin Exams, Yūra explained the details to the Suna Council. While many on the council voiced their concerns of making Gaara the Kazekage because of his powers, Yūra's stern glare ceased all further debate. Later however, Yūra secretly approached the naysayers about Gaara's plans to host the second exams in the Demon Desert location, subtly telling them to use it as a means to kill Gaara and disguise the deed as an accident.[2]

Yūra was said to be an industrious and loyal person.[1] From the little that was seen of him, this was true as he advocated new strategies and plans all geared towards improving the village. With regards to his loyalty, though two-sided, he was fiercely loyal to Sunagakure and after being awakened as a sleeper agent, showed great loyalty towards Sasori as well.

Yūra was a short man with black hair that hung over his right eye, a goatee and dark eyes. Usually he was seen wearing beige robe with black trousers and sandals. On missions, he wore a standard Suna shinobi attire, including a face-guard which covered his cheeks.[3]

As a jōnin and part of Sunagakure's council, Yūra was a very powerful shinobi. Sasori had chosen him to be a sleeper agent for good reason, which was justified when Yūra wiped out the entire force which was tasked with guarding Sunagakure's gate single-handedly despite the fact that there were many other jōnin and even Anbu present.[4]

Around the same time as Naruto Uzumaki's return to Konoha, Yūra and other members of Sunagakure's council were discussing intel gained from Jiraiya about the organisation known as Akatsuki, and he also had prepared a task force to be stationed around the borders of the village, to watch out for any members of Akatsuki. As he and Deidara approached the village, Sasori activated the technique to reawaken Yūra's memories of being an Akatsuki spy. After realising his true mission, Yūra killed the guards at the border, allowing Sasori and Deidara to enter the village to carry out their mission. Sometime later, Yūra was used by Pain as a sacrifice for the Shapeshifting Technique, becoming a replica of Itachi Uchiha and soon met combat with Chiyo and Team Kakashi. Ultimately, Yūra was defeated and killed by Naruto's Big Ball Rasengan. His corpse was later devoured by Zetsu. 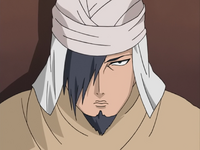