Yomi (黄泉, Yomi) was an evil medical-nin and the secondary antagonist in Naruto Shippūden the Movie.

Yomi came from a long line of followers of Mōryō who had spent generations perfecting a dark form of medical ninjutsu. A very long time ago, there was a member of his clan that made an attempt to utilise Mōryō to take over the world, but was stopped by Miroku after she sealed Mōryō away.

Yomi was an extremely dedicated individual going to almost any lengths to further his goals. He wasn't one to state his ambitions out loud or show his drive very strongly. He thought that even if he were to die, his will would live on. He was also a very commanding fellow and even referred to his underlings as "wretched fools". He, like his underlings, was very overconfident in his and his team-mates abilities.

Yomi had fair skin, long black hair, light tan eyes with black pupils, and a facial goatee. He wore a grey attire, a black trench coat, and martial artist shoes. He had a large cut running from the top centre of his chest down to his waist that he had stitched up.

Yomi was shown to have great expertise in medical ninjutsu. He could utilise dark chakra to enhance the chakra of anyone he wished with ease, allowing them to fight for longer periods of time and to perform more powerful techniques. His skill in medical ninjutsu was great enough to effectively (although only for a limited amount of time) use his body as a container for a demonic spirit. He claimed that, by bearing the name "Yomi", he is the only one allowed to enter the realm in which the said demonic spirit was sealed.

While Yomi did not show any fighting skills in his appearance, he did show incredible speed, as when he and his subordinates prepared to raid the tomb of Mōryō's spirit, he seemingly teleported from in front of them to behind, in order to inject them with the dark medical chakra. He managed to break the seal on Mōryō's tomb open with a certain shock wave-like technique from his palm, which may be a variation of the Shrine Seal, as it contains the same portion of hand seals. He also has an immense tolerance for pain, as he sliced his own chest open with a scalpel to allow Mōryō to forcefully enter his body, which sent him flying backwards with considerable force, and then sewing up the incision in a matter of seconds with ease; when he opened up his chest cavity, no blood flowed out, but instead what seems to be a dark void within.

At the beginning of the movie he gave his men, the Gang of Four, special chakra enhancement by infusing them with dark chakra snakes, thus giving them access to techniques they could not normally use. After his men had taken down the guards of Mōryō's prison, Yomi then entered Mōryō's spirit cave and freed him. He then offered his body as a spirit container for Mōryō until they could retrieve Mōryō's body. When Kusuna reported that Gitai had been killed by Lee, Yomi made it clear that he didn't care, instead telling Kusuna to kill Lee, along with his friends and Shion. This resulted in Kusuna and the rest of The Gang of Four being killed. Shion then confronted Yomi, and prepared to seal Mōryō. Yomi interfered, but Mōryō wanted to take matters into his own hands and burst out of Yomi's body, subsequently killing him. Yomi's body then fell into the lava after the volcano erupted. 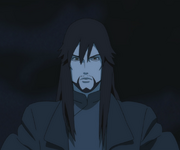