"A Dangerous Mission! Journey to the Land of Waves!"

Kakashi evades Sasuke's attack with the Body Replacement Technique. After blowing his position, Sasuke moves out to avoid being found by Kakashi. A worried Sakura runs off to find Sasuke, only to be caught by Kakashi's genjutsu that made her believe she found a very injured Sasuke. This caused her to scream and faint. Once confronted by Kakashi, Sasuke forces Kakashi to stop reading Icha Icha and use both hands to defend against his string of taijutsu attacks. Sasuke then launches a giant fireball at Kakashi. The jōnin manages to avoid it by burring underground, before dragging Sasuke down, leaving only his head to be seen.

Naruto manages to free himself from the tree he was hanging from and spots the food for lunch. Before he can try to snag a bite, Kakashi appears and ties him to a tree post. Elsewhere, Sakura wakes up and goes to look for Sasuke, whom she still believed was injured. She finds him buried from the neck down and comes to the conclusion that he was decapitated, before fainting again. Sasuke manages to free himself and is there to see Sakura awaken, who is relieved to see he is unharmed. Despite time running out, Sasuke is still set on getting a bell, informing Sakura that he came close to doing so. Knowing that she couldn't get a bell and didn't want to be separated from Sasuke, Sakura tries to convince him to give up and try next year. Sasuke dismisses the idea, explaining that he is an avenger and doesn't need any setbacks. Before they know it, time is up.

Afterwards, Kakashi meets with the three genin, who tells them that he won't be sending them back to the Academy. The three share in the happy news until Kakashi goes on to say that they will be dropped from being a ninja permanently. Naruto is outrage at this and asks him why. Kakashi explains that they don't think like ninja, thinking more like "little kids". Sasuke charges at Kakashi, but is easily restrained. Kakashi further explains that team-work was the key in retrieving a bell. Kakashi notes that each of them were so self-entitled throughout the challenge: Naruto recklessly tried to face a foe who clearly outmatched him alone, Sakura focused all her interest on Sasuke when she was prime to help Naruto, while Sasuke arrogantly believed his team-mates weren't worth his time and acted as such. After showing them Konoha's Memorial Stone, Kakashi decides to give them another chance. Kakashi tells Sasuke and Sakura to eat and replenish their energy. However, since Naruto broke the rules and tried to eat before the test was complete, he is forced to watch. Furthermore, if either of them feed Naruto, they will immediately fail.

After Kakashi leaves, Sasuke and Sakura begin eating their food, while Naruto's stomach growls of hunger. Sasuke decides to share his food with Naruto, stating that they'd need to retrieve the bells as a team and need everyone at good strength. Sakura hesitates, but decides to share her food as well. Kakashi suddenly appears and tells them that they will be punished for not following orders. However, Naruto, Sasuke and Sakura band together to state that they are a team, and to their surprise, are rewarded with Kakashi stating they have passed. He explains that those who break the rules are considered scum, but those who abandon their friends are even worse than scum. He states that they are the only team to abide by his orders. 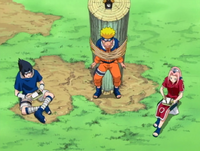