With Zabuza immobilised, Kakashi prepares his Lightning Cutter so that he can finally put an end to Zabuza's schemes. Elsewhere, Haku asks Naruto to kill him. Believing that death is the only way Haku will find happiness, Naruto charges at him just as Kakashi charges at Zabuza. Sensing his master's danger, Haku blocks Naruto's attack and disappears. Using himself as a human shield, Haku takes the full force of the Lightning Cutter, at the same time releasing Zabuza from the ninken. With the last of his strength, Haku grabs Kakashi to prevent him from escaping. 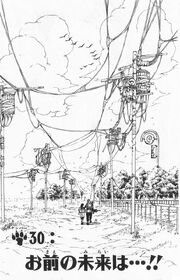