Yukata (ユカタ, Yukata) is a young kunoichi from Sunagakure. She is part of a genin group alongside Matsuri and Mikoshi.

Yukata, alongside Matsuri and Mikoshi, is shown to have been set to take part in the Chūnin Exams, which would be held in Konohagakure and Sunagakure.[1] Once entering the exams, Matsuri and her teammates were randomly split into different rooms to take the written test. On a monitor, Shikamaru Nara explained that everyone only needs to answer one question on the test, but their team's combined score must equal exactly 100 points to pass. While everyone was struggling to find a way to contact their team members, Yukata couldn't even solve the written problems themselves.[2] After time is up, Shikamaru revealed a bonus question. She, like her teammates, left the question unanswered, and ultimately her team passed the first round. However, a preliminary round had to be held to lessen the many participants there were which involved a race to Suna where only the first 30 teams to arrive at the destination would qualify for the second phase.[3]

Ultimately, her team were among the first 30 teams to make it. During dinner, she was upset at the food catastrophe and joined her teammates in the fight that commenced between the genin in the room. The next day, the second exam proctor, Temari, announced the start of the second round taken place within Demon Desert.[4] Later, knowing they were running out of time to pass the exams, Mikoshi suggested they go intercept an enemy team already attempting to complete the exam with both scrolls and take the needed scroll. Along the way, they were caught in a massive sandstorm. Ultimately, Mikoshi falls into quicksand. While Matsuri was able to catch him initially, the whole team ends up falling in. Fortunately, she and her team are saved by Fū. After they regained consciousness, Fū offered them her scroll, saying she no longer needed it. Yukata, while initially wanting it, accepted her teammates' decision to decline, following Gaara's example of persevering through struggles.[5]

Afterwards, Yukata and her team were attacked by Hōichi, who captured them. As the genin screamed, Gaara heard and returned to rescue them. After they were freed, Hōichi subdued Gaara with chakra chains that began extracting the tailed beast within in. Gaara told the genin to retreat and leave this to him. Despite his orders, the genin instead chose to get help. Part way, Yukata collapsed and it was decided that she stay behind with Mikoshi while Matsuri went on.[6] Later, the two were found my Might Guy, Kurenai Yūhi, and Asuma Sarutobi of Konohagakure who they told of the situation.[7]

Later, as the exam was nearly over and her team had yet to find a matching set of scrolls, Matsuri decided instead of find Shira, a fellow Suna-nin who like her was a student and supporter of Gaara with the desire to fight him. While Shira has no desire left to fight and offers his scroll, much to Yukata's joy, Matsuri rejects it and makes her intention known, which he agreed to. Ultimately, Matsuri lost, but took her defeat in stride. Their two respective teams then went to the main building to wait for the second exam's conclusion. Ultimately, the Chūnin Exams were ended early before starting the finals due to controversy happening in the second exam. Instead, it was decided by Gaara that a report on each participant would be sent to their respective village leader for them to decide if they would be promoted.[8]

Yukata, like Matsuri and many other Suna kunoichi, has great admiration for their current Kazekage — Gaara. This was seen during the Fourth Shinobi World War when she and a few others were seen gushing over the Kazekage's speech to the masses.[9] Yukata has shown to be rather clueless at times, such as when she had to be lectured about the basics of nature transformation,[10] when she didn't know the current Tsuchikage,[11] or when she didn't understand that her fellow genin were trying to figure out how to answer the real problem during the written test of the Chūnin Exams (contacting the other team members to coordinate the solving of the questions to reach a total of 100 points), while she herself had problems to even figure out the answers to the questions themselves, which were rated to be very easy by the other genin.[2] She has a carefree disposition, seen when she wonders about Naruto's presence on the battlefield even with a giant threat, such as the Third Raikage, being right in front of her,[12] or when she remains jubilant while the genin around her are growing desperate about the complicated test during the Chūnin Exams. She is also very optimistic, assuming that she and her teammates will become chūnin even before the exam begins.[2]

Yukata is a fair-skinned girl with long, dark hair and large, brown eyes framed by noticeable eyelashes. She wears the standard attire of the Sunagakure shinobi with a flak jacket, a dark skirt, two arm-guards and the forehead protector of the Allied Shinobi Forces. During the Chūnin Exams, she wore a grey midriff vest over a short plain shirt, revealing her bare stomach. She already wore her arm-guards and the skirt. Additionally, she wore black stockings and a Sunagakure forehead protector.

Yukata seems to have some skill in Wind Release techniques, having joined other Wind Release users to battle the reincarnated Third Raikage. However, Temari states that she isn't a long-distance user.[12]

Yukata was placed in the Fourth Division of the Allied Shinobi Forces and was seen gushing over Gaara after he addressed the alliance and was able to rally the shinobi into uniting as one army to defeat Akatsuki. Later, she is seen with Temari, Shikamaru, Chōji, and Matsuri. Shikamaru discusses about the topic of kekkei tōta, where Yukata had problems to understand the explanation. Soon, she is seen with Matsuri, lending towels to Gaara, telling him that he must conserve his strength. However, to their dismay, he tells them to give them to Ōnoki instead. While they didn't know him, Ōnoki declares that he is the Tsuchikage, much to their surprise.[11]

The next day, the Fourth Division makes their move on the reincarnated Kage and Yukata and Matsuri join other Wind Release users in subduing the Third Raikage. Matsuri asks Temari their next move after Naruto could not damage the Raikage. Yukata asks who Naruto is and Matsuri explains he is the hero of Konoha who defeated the Akatsuki leader Pain. Annoyed with their discussions, Temari tells the two kunoichi to keep their distance. After Naruto defeated the Raikage, Yukata and Matsuri were celebrating the victory. She is later seen escorting the Tsuchikage to a medical tent. Yukata was later seen teasing Temari about her former acquaintance Daimaru and that Temari might be love with someone else, which the older kunoichi denies in embarrassment.

Yukata is present when Madara Uchiha arrives alongside Mū on the battlefield.[13]

Later, Yukata is shown waking up after the Infinite Tsukuyomi is released by Naruto and Sasuke.[14] 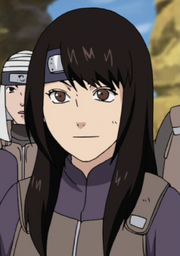